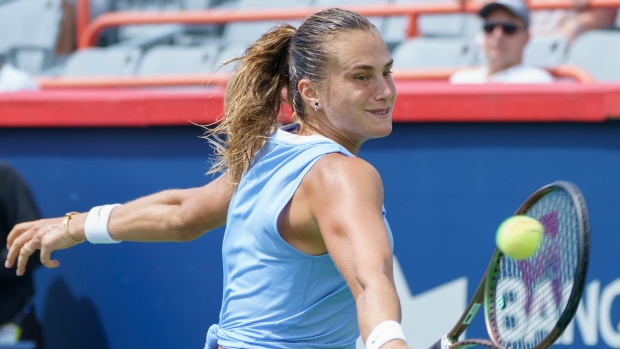 Aryna Sabalenka and Victoria Azarenka, both of Belarus, kicked off the quarterfinals at the women's tournament in Montreal on Friday, with the No. 1 seed Sabalenka taking a 6-2, 6-4 victory.

Sabalenka went down 4-2 in the second set before winning four games in a row, and had seven aces across the one hour 19-minute match.

The 23-year-old world No. 3 said she's been working on staying focused throughout a match, no matter what's happening on the court.

"I knew that even if I'm down with the score, I still can come back in the match," she said. "These kind of thoughts help me be a bit more free on the court."

For Azarenka, the tournament's No. 8 seed, the difference across the match was minimal.

Sabalenka will play No. 4 seed Karolina Pliskova of the Czech Republic after she beat Spain's Sara Sorribes Tormo 6-4, 6-0 on Friday.

The pair previously met in the semifinals at Wimbledon last month, with Pliskova taking a 5-7, 6-4, 6-4 victory.

"I would say that (on Saturday), I have to first of all serve well and secondly, I just have to use all these opportunities on her serve," Sabalenka said.

No Canadian singles players made it through to the tournament's quarterfinals, but Ottawa's Gabriela Dabrowski and doubles partner Luisa Stefani of Brazil secured a spot in the semifinals when they downed Sabalenka and Elise Mertens of Germany 6-2, 6-2 on Friday.

Dabrowski and Stefani, the No. 5 seeds, will take on Russia's Veronika Kudermetova and Elena Rybakina of Kazakhstan on Saturday. The match is set to be played in front of fans, the first time Dabrowski will see a crowd at this year's tournament.

She's hoping to give Canadian fans something to cheer for, but noted that various international players have brought out boisterous fans throughout the event.

"The one amazing thing about Canada is that we are so multicultural and so we have so many fans from all over the world," Dabrowski said, noting the Tunisian fans who came out to support Jabeur on Thursday night. "I think that's a beautiful thing that Canada has to offer."