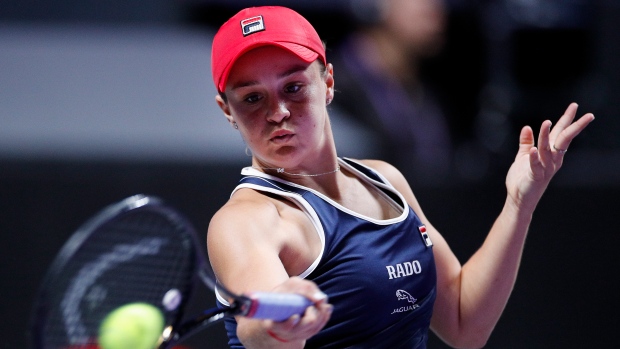 SHENZHEN, China — World No. 1 Ashleigh Barty was upset by late substitute Kiki Bertens 3-6, 6-3, 6-4 at the WTA Finals on Tuesday.

Bertens arrived at the elite tournament as an alternate, and has suddenly jumped into title contention with the other seven players in the draw. She took the place of Naomi Osaka, who withdrew from the finals on Tuesday with a right shoulder injury ahead of her second round-robin match.

The second singles of the day went in Belinda Bencic's favour when she outlasted Petra Kvitova 6-3, 1-6, 6-4.

The Bencic win means all four players in the Red Group are still in contention for semifinals action. The standings have Bencic and Barty at 1-1, Kvitova at 0-2, and Bertens at 1-0 going into the last round-robin matches. On Thursday, Barty will play Kvitova, and Bertens will meet Bencic.

"When you give a player of Kiki's calibre a chance to get back into the match not once but twice, she's going to make you pay," Barty said. "That's probably the most disappointing thing. Twice in the second set I was up a break and wasn't able to consolidate."

Bertens came close to beating Barty in the Beijing semifinals this month, losing in a third-set tiebreaker.

The Dutchwoman arrived in Shenzhen straight from losing to Aryna Sabalenka in the Zhuhai, China, final on Sunday.

"In the beginning I was a little bit struggling," Bertens said. "As the match was continuing, I felt better and better. The movement was getting a bit better. I was starting to feel the court. I could play a little bit more aggressive, come to the net.

"Yeah, I played pretty well in the end."

Bertens broke serve on a fourth break point in the opening game of the third set and raced to 4-0.

Last year, she reached the semifinals in her WTA Finals debut.

Despite the loss, Barty officially secured the year-end No. 1 ranking. She's the first Australian woman to earn that distinction.

Only Karolina Pliskova and Osaka had an opportunity to prevent Barty from finishing the season as the year-end No. 1. They both had to win the title here with a perfect record in the round-robin.

Pliskova lost to Elena Svitolina in her opening round-robin match in the Purple Group on Monday.

Bencic, in her WTA Finals debut, decisively broke Kvitova in the ninth game of the third set.

"You go into a match against Kvitova and you never have anything in your hands," Bencic said. "I don't think we played our best but I found my game the last few games.

"I knew if I didn't win I'm eliminated. but I didn't think about that."

Bianca Andreescu of Mississauga, Ont., is scheduled to face Karolina Pliskova of the Czech Republic on Wednesday after losing her first match against Simona Halep.

Meanwhile, Ottawa's Gabriela Dabrowski and China's Yifan Xu fell to 0-2 in the doubles WTA Finals. They lost 4-6, 6-4, 10-5 to Shuai Zhang of China and Samantha Stosur of Australia on Tuesday.