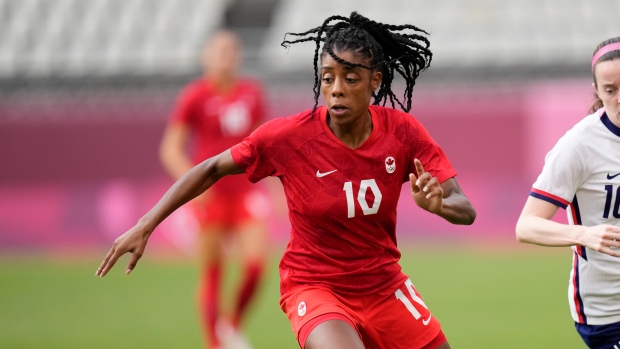 Canada will be without Ashley Lawrence when it takes on New Zealand in a pair of women's soccer friendlies.

The Canadians, currently ranked sixth on the world, play the 23rd-ranked Football Ferns on Saturday at Ottawa's TD Place and Tuesday at Montreal's Saputo Stadium. The games, billed as a "Celebration Tour," are the first for Canada since winning Olympic gold in Tokyo this summer.

"You've seen how busy her season's been," Priestman told a virtual availability Friday. "She wouldn't be available to play in the match. So we collectively made that decision that it's best for Ash to … get ready to play for PSG.

"Obviously she's disappointed not to be here. And I know the teams and the fans would absolutely love Ashley to be here."

Lawrence, a 26-year-old fullback/midfielder from Caledon East, Ont., has won 101 caps for Canada. She is one of three Canadian women, along with captain Christine Sinclair and midfielder Jessie Fleming, among the 20 finalists for the Ballon d'Or as the world's top player.

Priestman, who will be taking part in her first game as Canada coach on home soil, said 20-year-old defender Jayde Riviere was late arriving in camp due to academic demands at the University of Michigan. Riviere, a native of Markham, Ont., with 25 Canadian caps, was due to arrive Friday.

The Canadian women are 8-1-4 all-time against New Zealand, with the lone loss coming in their first meeting in December 1987.

Canada won 3-0 the last time the two played, at a tournament in China in November 2019.

The two countries met at the last two World Cups. They played to a scoreless draw in Edmonton in June 2015, with Canada winning 2-0 in Grenoble, France, in June 2019.

Canada's next official matches will be in July at the 2022 CONCACAF W Championship.

This report by The Canadian Press was first published Oct. 22, 2021