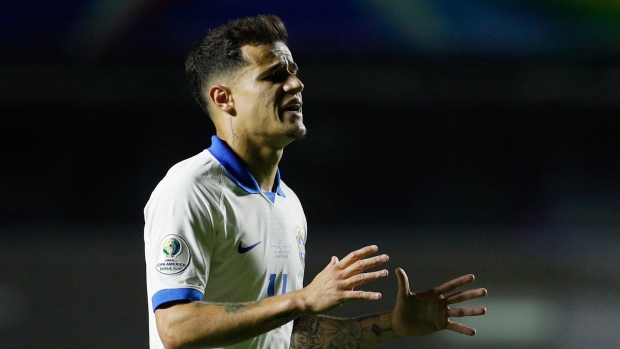 Aston Villa has signed the Brazil winger on loan from Barcelona for the rest of the season with an option to buy. The deal is subject to a medical and a work permit.

It's a return to the Premier League for the 29-year-old Coutinho who spent six seasons at Liverpool.

A native of Rio de Janeiro, Coutinho arrived in Europe in 2008 with Inter. After loan spells with Vasco de Gama and Espanyol, Coutinho headed to Anfield on a permanent deal in 2013 in a £8.5 million transfer.

He would make 152 league appearances for the Reds, scoring 41 goals, before forcing a move to Barca in January of 2018 in what would be one of the largest transfers in European history. The Blaugrana paid an initial £106 million for Coutinho with clauses that could have taken the total to £142 million. What the actual final cost of the move was remains unclear.

Coutinho's move to Camp Nou was a rocky one with the Brazilian never truly settling into the team.

In 2019, Coutinho moved to Bayern Munich on loan, winning a treble in his loan season in Germany as the club won the Bundesliga title, the DFB-Pokal and the Champions League.

In Coutinho's four seasons with Barca, he has made 76 league appearances.

Internationally, Coutinho has been capped 63 times by Brazil and was a member of the 2019 Copa America-winning side.

Villa is next in action on Monday when it hosts Manchester United in the third round of the FA Cup.