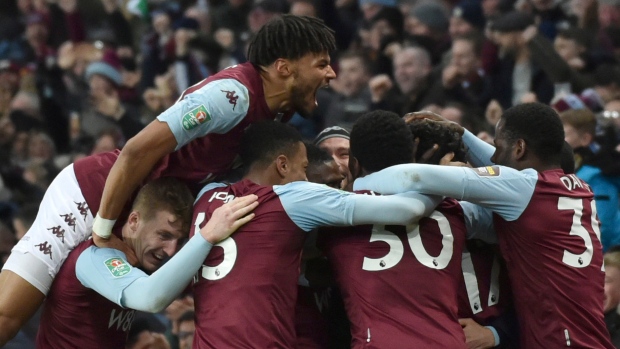 BIRMINGHAM, England — Trezeguet punched the air with both fists and roared with joy as he swayed above a sea of jubilant Aston Villa supporters.

Six months into his time at Villa Park, the Egypt midfielder made himself a firm fans’ favourite by sending the club into a cup final at Wembley Stadium on Tuesday.

Trezeguet scored with a far-post volley in the third minute of stoppage time to earn Villa a 2-1 win over Leicester and a title match in the English League Cup against either Manchester City or Manchester United on March 1. Villa won 3-2 on aggregate.

Having recently seen their team drop into the Premier League’s relegation zone, Villa’s fans savored a rare moment of celebration this season by swarming onto the field after the final whistle.

Naturally, Trezeguet was one of the prime targets of their affection, and he was hoisted onto some supporters' shoulders.

“We fight until the end,” said the midfielder, who only came on in the 77th minute of a match Leicester dominated - like it did in the first leg that finished 1-1 three weeks ago.

Indeed, Villa advanced having had four shots on target - and scoring from three of them - across the two legs of the semifinal.

The team from central England will look to win the League Cup for a sixth time, and for a first time since 1996. Villa was in the competition's first final and will now play in its 60th.

“It shows what character we’ve got in the team,” said Villa captain Jack Grealish. “We were in a sticky patch before Christmas – we couldn’t string four passes together, never mind winning (a match).”

Villa's players were thrashed 6-1 by Man City in the league on Jan. 12, four days after somehow holding Leicester to a 1-1 draw in the first leg of the semifinal. They are unbeaten in three games since, winning two of them, and a run to the League Cup final might inspire confidence that they can preserve their top-flight status.

City is likely to be Villa's opponent at Wembley, with the defending champion holding a 3-1 lead from the first leg at United's Old Trafford. The second leg is on Wednesday.

Leicester manager Brendan Rodgers lost a cup match for the first time since 2015, having won back-to-back Scottish Cup titles and the Scottish League Cup three years in a row when at Celtic before returning to English soccer in February last year. By that time, Leicester was already out of both of England's cup competitions last season.

Villa took the lead on the night, and on aggregate, when left back Matt Targett smashed in an angled shot after being teed up by a clever reverse pass from Grealish.

Kelechi Iheanacho equalized, like he did in the first leg, in the 72nd and Leicester looked like the team more likely to go on and win the match.

Then, just as penalties beckoned, Egyptian substitutes combined as Ahmed Elmohamady swung over a cross from the right and Trezeguet made no mistake with his volley.

Trezeguet has been no more than a bit-part player since joining from Turkish club Kasimpasa in the off-season.

Villa had another of its more unheralded players, back-up goalkeeper Orjan Nyland, to thank for keeping Leicester at bay in the first half, especially. One save, when he tipped Youri Tielemans' shot onto the crossbar, was particularly impressive.

“I thought we were excellent in the game,” Rodgers said. "Their goalkeeper made some outstanding saves.

“It's tough to take looking back over the two games, but congratulations to Aston Villa and we have to move on.”