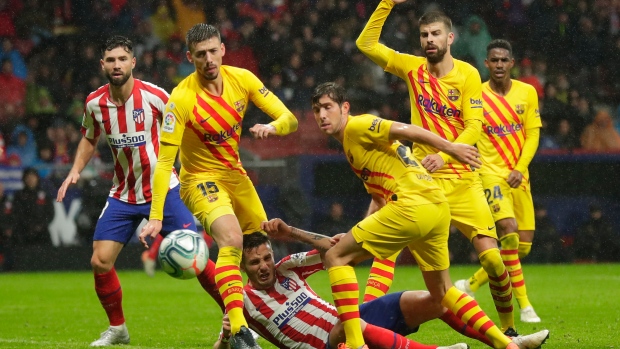 MADRID — Atlético Madrid's struggles in the Spanish league continued with a 0-0 draw at Villarreal on Friday.

Atlético stayed in sixth place with 26 points from 16 matches, five points behind leaders Barcelona and Real Madrid, which both have two games in hand on Atletico entering the weekend — including one against each other on Dec. 18.

It was the fourth straight match without a win for Atlético in all competitions, and the third consecutive without scoring a goal.

Diego Simeone's team has won only one of its last eight matches in all tournaments, with its only triumph a 3-1 result at home against Espanyol in the Spanish league last month.

“The team is trying but we are not being lucky, or not being precise enough up front,” Atlético defensive midfielder Jorge “Koke” Resurrección said. “We need to start scoring goals. The team is defending well, but we need to improve up front.”

Atlético had one of the game's best chances on Friday when Portugal teenager João Félix hit the post with a low shot from outside the area in the first half. He also nearly scored with a close-range shot with only goalkeeper Sergio Asenjo to beat. In the second half, Félix made a well-placed cross to Renan Lodi, but his 79th-minute strike from near the net sailed wide.

“We needed the victory,” Simeone said. “But we are on the right track, we had some clear opportunities. We have to keep creating chances like we did tonight.”

Atlético was coming off a 1-0 home loss against Barcelona, when it dominated during most of the match but conceded in the 86th. It also lost 1-0 at Juventus in the Champions League.

The team is without striker Diego Costa because of a back injury, with Álvaro Morata playing in the attack along with Félix.

“We are going through a difficult phase, but things will improve,” Félix said.

The result extended Villarreal's winless streak to six matches. It had lost four of its last five games. The team is in 12th place, six points from the relegation zone.

“We deserved to win this match,” Asenjo said. “We played perfectly defensively. If we keep getting clean sheets, things will eventually start working out in the attack.”

Villarreal has lost only one of its last nine matches against Atlético in the league, a 2-0 result in February in Madrid.

Atlético had lost three of its last four matches at La Cerâmica Stadium in Villarreal.

Atlético went into the 15th round with only 25 points, its joint worst performance since Simeone took over in late 2011. It also had only 25 points at the same point in the 2016-17 season.