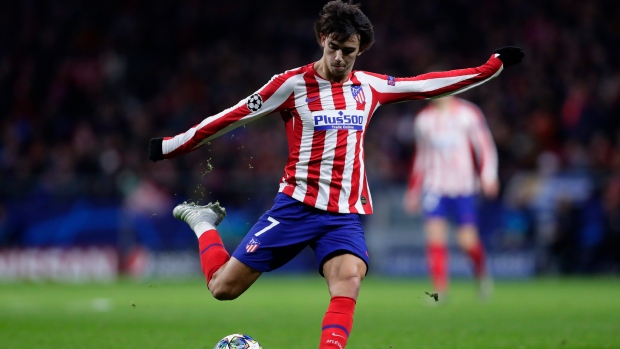 MADRID — With Atlético needing a win to keep its Champions League hopes alive, youngster João Félix didn't shy away from the responsibility.

After seeing teammate Kieran Trippier miss a penalty kick two minutes into the match against Lokomotiv Moscow on Wednesday, Félix made sure Atlético didn't falter again after being awarded another penalty early in the first half.

The 20-year-old Félix quickly picked up the ball and confidently put it on the penalty spot. He then calmly sent a low right-footed shot into the net to help lead Atlético to a 2-0 victory and a spot in the round of 16 of the Champions League.

“When you are young, you are not afraid of anything,” Atlético coach Diego Simeone said of Félix.

The Portugal forward had already wanted to take the first penalty, which came after he was fouled, but it was Trippier who was given the chance, apparently on orders by Simeone, who said the English right back is the team's best penalty taker.

The coach wouldn't interfere the second time around, though, and Félix came through with the opening goal.

“He has a lot of confidence,” Atlético midfielder Jorge “Koke” Resurrección said. “When he had his chance, he took advantage of it.”

Defender Felipe added to the lead in the second half, helping Atlético clinch second place in Group D. Juventus advanced as the group winner.

Atlético needed a win to guarantee second place, but would have advanced even with a loss after third-place Bayer Leverkusen lost 2-0 to Juventus in Germany.

Atlético dominated from the start at the Wanda Metropolitano Stadium, with the Russian side rarely getting near the goal of Atlético goalkeeper Jan Oblak.

Félix's 17th-minute penalty came after a video review determined there was a handball by Lokomotiv forward Rifat Zhemaletdinov inside the area.

Félix — signed by Atlético from Benfica for more than 120 million euros ($133 million) to replace Antoine Griezmann — prompted the first penalty after being fouled by Lokomotiv goalkeeper Anton Kochenkov less than a minute into the match. Kochenkov saved Trippier's shot from the spot.

Felipe added to the lead in the 54th with a neat volley from inside the area after a cross by Koke. It was the defender's first goal with Atlético since joining the Spanish club this season.

Striker Álvaro Morata had also found the net for the hosts toward the end of the first half, but the goal was disallowed for offside on review.

The result halted Atlético's three-match winless streak and also ended its run of three straight games without scoring a goal.

“We needed a victory like this,” Koke said. “We had been doing a good job but the results weren't what we wanted. This time we created the chances and could capitalize on them."

Lokomotiv entered the match knowing it would finish last in Group D. Its only points in the group stage came from a 2-1 win at Leverkusen in the first match.

“To beat teams like Atlético Madrid you have to have players of the same quality," Lokomotiv coach Yuri Semin said. "Nevertheless, this campaign was a good experience for us.”

Diego Simeone's Atlético had won only one of its last eight matches in all competitions — a 3-1 win at home against Espanyol in the Spanish league last month.

Wednesday's win meant Atlético avoided losing three straight European matches for the first time since 1984. It was coming off a 1-0 loss at Juventus and a 2-1 defeat at Leverkusen.

Atlético was eliminated by Juventus in last season's round of 16.