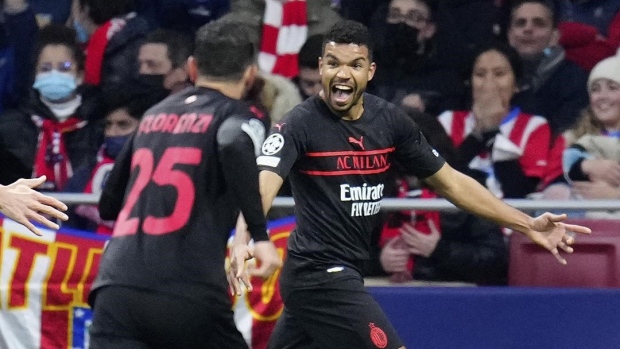 MADRID (AP) — A late goal by a 30-year-old Brazilian making his Champions League debut kept alive AC Milan's hopes of advancing and left Atlético Madrid on the brink of elimination.

Junior Messias scored in the 87th minute to hand Milan a 1-0 victory at Atlético on Wednesday, giving the Italian club hope after a winless start to its campaign in the European competition.

The result left Atlético and Milan tied on four points in the last two positions of Group B, with Atlético in last place on goal difference. Porto was a point ahead after a 2-0 loss at group-winner Liverpool.

Atlético will need to win at Porto and finish with a better goal difference than Milan if the Italians defeat Liverpool at home.

Milan needed the victory to avoid elimination. It had won only one of its last 11 Champions League games and once in its last seven road games in the competition from group stage to final.

Atlético was coming off consecutive losses to Liverpool and had to avoid defeat against Milan to stay in contention to reach the round of 16 without having to depend on other results.

“The Champions League is unforgiving,” Atlético coach Diego Simeone said. “You have to deserve to be able to go through and we are going to go after our spot in the game we have left.”

Atlético had won three in a row against Milan in the Champions League, including 2-1 in Italy in their first match this season.

Atlético struggled to impose its game at the Wanda Metropolitano Stadium and Milan looked like the more dangerous team during parts of the match.

Messias, who began his professional career only a few years ago, got the winner with a header from the six-yard line after a cross from the left flank.

“I saw the ball, I didn’t think twice and fired it home,” he said. “I dedicate this goal to my family and friends in Brazil, and to those at Milan who believed in my qualities.

"It’s the biggest success of my life, but I need to carry on with balance,” he said.

Atlético had lost only twice in its last 31 European games at home.

The Spanish club has advanced to the last 16 in nine of its last 11 group-stage appearances, reaching the quarterfinals or better in five of its last eight campaigns. It was eliminated by eventual champion Chelsea in the first knockout round last season.

Atlético has won only two of its last 11 Champions League matches, failing to score in four of its last seven games in the competition.

Milan advanced past the group stage in its last 11 Champions League campaigns, with five of the last six ending in the round of 16. It was Atlético that halted Milan’s previous appearance in the last 16 in the 2013-14 season.

"I believe we’re on the right path and tonight the team showed their growth,” Milan coach Stefano Pioli said. "My players had a great game, they deserved to win. We had quality, mentality and it’s great to celebrate together.”

Simeone was able to count on Antoine Griezmann after UEFA reduced the player’s suspension for a red card against Liverpool from two games to one. He had already served the first game of the suspension. Defender Felipe didn’t play because of his red card suspension.

Milan striker Zlatan Ibrahimovic, who came off the bench in the 66th, remained two goals away from scoring his 50th Champions League goal from group stage to final. He scored his first more than 19 years ago.

If he scored once he would have surpassed former Roma striker Francesco Totti as the oldest player to find the net in the Champions League at the age of 40 years, one month and three weeks.