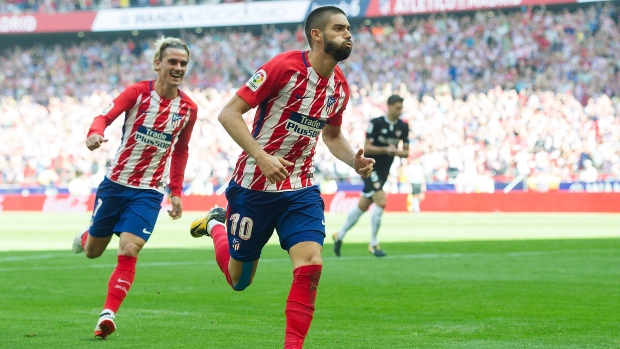 BARCELONA, Spain — Atlético Madrid stumbled again in its bid to win a first Spanish league title in seven seasons after drawing 1-1 at Real Betis on Sunday, leaving it narrowly ahead of second-place Real Madrid and Barcelona.

Yannick Carrasco put Atlético ahead five minutes into the match in Seville. But Cristian Tello struck back for Betis in the 20th, and the struggling front-runners needed goalkeeper Jan Oblak to make several saves to protect a point.

Diego Simeone’s side edged one point ahead of defending champion Real Madrid, which had gone top — on the head-to-head tiebreaker with Atlético — after it beat Barcelona 2-1 on Saturday. Barcelona is in third place, a further point behind.

Atlético had led Madrid by 11 points at one stage after its very strong first half of the season. But Diego Simeone’s team has struggled in 2021, winning just two of its last six league matches

It now can’t afford any further setbacks over the final eight rounds of the season.

“We started the season strong, while Madrid and Barcelona had troubles. Now we are struggling while Madrid is coming on strong after its big win, and Barcelona is right there,” Simeone said. “I love this stage of the season. It is decisive, it is exciting. We wanted to be here at the top, fighting against the best.”

Atlético went into the match without Luis Suárez, its top scorer, and versatile midfielder Marcos Llorente. They were both suspended after picking up a fifth booking in last round’s 1-0 loss at Sevilla. Backup striker Moussa Dembélé was still unavailable after he lost consciousness in training two weeks ago.

The visitors’ attack got even thinner moments into the second half when João Félix asked to be substituted. He had tried to play on after he hurt his right ankle just moments before halftime.

Suárez, Llorente and Félix have combined for 39 of Atlético's 59 goals in all competitions this season.

Atlético also lost its attack-minded right back Kieran Trippier with 12 minutes left after he took a hard knock to his lower back.

Simeone said that Félix was already being bothered by pain before he went down, adding that he hoped the Portugal playmaker would be fit for next weekend's game against Eibar.

Suárez's availability for that game could also be in doubt after he injured a left-leg muscle during practice this week.

Carrasco scored the early opener after Félix broke down the defence with two quick, short passes in a tight space. Ángel Correa forced Aissa Mandi to block his shot from close up, and the ball fell to Carrasco to finish off with goalkeeper Claudio Bravo off his line.

Betis soon responded when Tello came in from the left flank to the centre of the area where he was unmarked to drive in a cross from Álex Moreno.

Atlético’s Correa did muster two late chances as the Betis defence flagged in stoppage time, only for Bravo to parry both his attempts.

Manuel Pellegrini’s Betis, which has come on strong since the winter break, remained in sixth place with only two losses in its last 14 league games.

“I am not satisfied with the draw,” Pellegrini said. “We had three or four chances to put this away. We were superior in the second half, but lacked precision in our finishing.”

Defender Gabriel Paulista earned a penalty and scored Valencia’s equalizer to help his team erase a two-goal deficit and draw 2-2 with Real Sociedad.

Daniel Wass pulled one back from the penalty spot in the 60th minute after Paulista was fouled by Carlos Fernández in the area.

Paulista levelled the score in the 73rd when he headed in a cross from Gonçalo Guedes.

Valencia played the final 10 minutes with 10 men after Maxi Gómez got a second yellow card.

It was the first game for Valencia since Mouctar Diakhaby said he was racially abused by Cádiz player Juan Cala who has denied any wrongdoing.

Osasuna ended a run of four games without scoring in a 2-1 win at Villarreal.

Jon Moncayola ended his team’s drought with a superb volley in the 64th. After David García scored an own-goal to make it 1-1, Osasuna striker Ante Budimir headed the visitors back in front.

Also, Jorge Molina and Quini Marín scored late to give Granada a 2-1 comeback win at Valladolid.