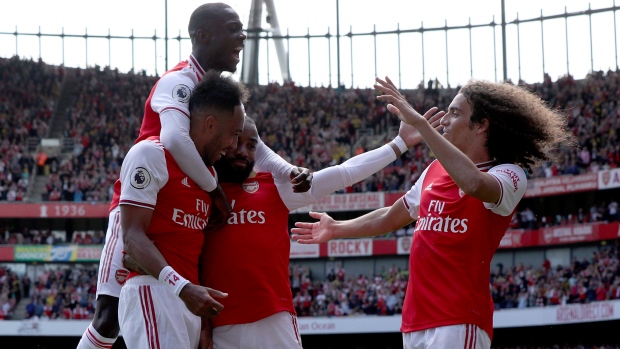 LONDON — Pierre-Emerick Aubameyang scored a winning goal for the second straight weekend as Arsenal beat Burnley 2-1 in the Premier League on Saturday.

In a match where off-season loanee Dani Ceballos excelled for Arsenal in midfield, Aubameyang provided the cutting edge in a dominant second half by the hosts by cutting in and driving a low shot inside the near post in the 64th minute.

The Gabon striker clinched a 1-0 victory for Arsenal at Newcastle on the opening weekend of the season.

Ceballos, signed from Real Madrid on a season-long loan, was the game's standout player with his touch, skills and vision. He also took the set pieces and, from one of them, his right-wing corner found Alexandre Lacazette. The recalled striker controlled the ball before forcing in a finish on the turn through the legs of goalkeeper Nick Pope in the 13th.

It was Lacazette's 21st goal in 36 home appearances for Arsenal.

Burnley equalized in the 43rd through Ashley Barnes, who grabbed his third goal of the season by tapping in after controlling Dwight McNeil's low cross into the area.

David Luiz made his debut for Arsenal after his deadline-day move from Chelsea, while another off-season signing — forward Nicolas Pepe — shone after coming on as a halftime substitute.

Ceballos' pressing was also a feature of his game and he won the ball back in the Burnley half to allow Aubameyang to collect, drive forward and score the winner — his seventh goal in four Premier League appearances against the Clarets. He celebrated with a forward somersault in front of Arsenal's jubilant fans.

Ceballos was given a standing ovation when he was substituted in the 83rd.

Burnley opened with a 3-0 home win over Southampton.