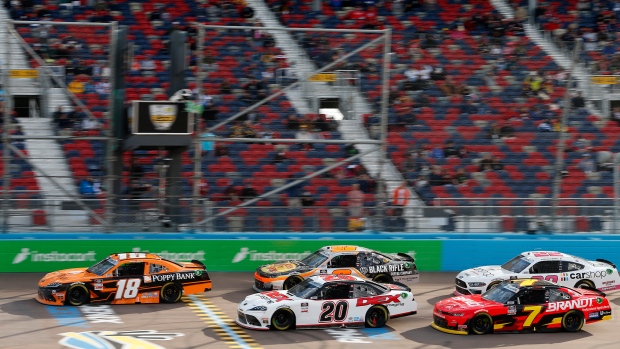 Cindric won again on the track where he captured his first NASCAR Xfinity Series championship in November.

He led 119 of 200 laps in the No. 22 Ford and was never far from the front of the field, but he had to survive a chaotic restart with a couple laps left for his second victory of the season.

“They never come easy," Cindric said. “This is a really important track this season and I am pumped for this team. Hopefully we put on a great show there. We were ruining each other there at the end.”

Ty Gibbs, the 18-year-old who won in his first Xfinity start on the road course at Daytona last month, was second after starting 27th. Gibbs — who is the grandson of three-time Super Bowl winner Joe Gibbs and part of Joe Gibbs Racing — also won the ARCA race in Phoenix on Friday night.

Gibbs worked his way into the top 10 by the end of the first stage and then moved into the top five late in the race. He took advantage of the final tense restart — which included a stretch of five-wide racing for a few seconds — to push into second place.

Once Gibbs got clear of the chaos in the restart, he set his sights on Cindric, but couldn't catch up.

“I just didn’t have enough time,” Gibbs said. “We were closing on him but we got a little tight.”

Justin Allgaier gave Cindric a hard run on the final restart, pulling to the outside for the pass, but he got too close to the wall, lost traction and Cindric was able to shoot by and win with room to spare. Allgaier fell to eighth, which was his first top 10 of the season.

“He just got a really great launch,” Cindric said about Allgaier. “I think he anticipated the restart really well and got to my outside. He faked low and went high and had the momentum that was hard to block. I was trying to defend the bottom, middle and top. I got the air sucked off my door a little bit. It was just hard racing a little bit there.”

Cindric started third but jumped into the lead almost immediately, moving past pole sitter Daniel Hemric on the opening lap. The 22-year-old was dominant in the first stage, leading all 45 laps.

Hemric started on the pole after finishing in second at Las Vegas last weekend. He had a good pit stop after the first stage that pushed him into the front of the field and he parlayed that momentum into a second stage victory.

But Hemric's Toyota got caught in traffic on the final restart and faded to 23th. He's still looking for his first Xfinity series victory.

Brandon Jones was running up front with the leaders in the first stage but was penalized for speeding on pit road and had to start the second stage at the back of the field. He made it back to the front of the field but crashed with about 30 laps left after getting bumped from behind by AJ Allmendinger on the backstretch.