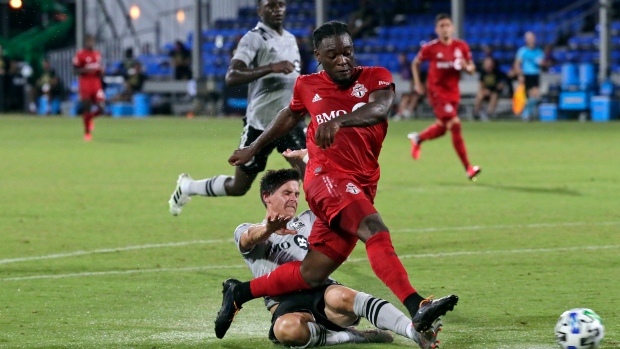 Akinola is out of contract ahead of the 2022 Major League Soccer season, but the forward has agreed to a new deal that will pay him six figures a season.

Akinola’s new contract is thought to be among the richest ever given to an MLS homegrown or academy product, and the 21-year-old expects to compete to be Toronto’s starting striker.

Born in Detroit, Akinola moved to Brampton, Ont., as a toddler and joined TFC Academy as a teenager. In 46 career appearances for TFC over four seasons, Akinola has 14 goals.

Akinola is currently recovering from ACL surgery he had in August for an injury suffered while playing for Canada at the Gold Cup. Sources tell TSN that Akinola is back running and will travel with TFC for preseason training in the hopes he will be ready to play for the club in April or May.

Nevertheless, Akinola still has dreams of playing in one of Europe’s top five leagues, and there is hope his production over the life of his new TFC deal will attract more overseas attention.

Before signing his new contract, Akinola considered interest from clubs in the English Championship, Belgium, and Cyprus.

Before his season-ending knee injury in July, Akinola committed to switching his international allegiance from the U.S. to Canada.