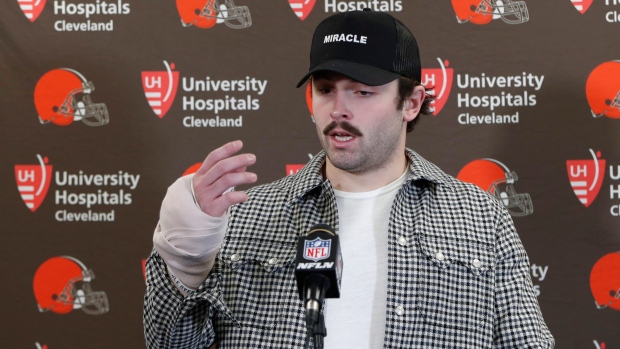 Cleveland Browns quarterback Baker Mayfield injured his right hand in Sunday's 20-13 loss to the Pittsburgh Steelers, but the third-year man says he envisions himself playing against the Cincinnati Bengals next Sunday.

“I fully expect to be able to play,” Mayfield said during his postgame media availability.

Mayfield injured his hand near the end of the first half on Sunday, after his hand hit the face mask of Steelers linebacker Bud Dupree while the quarterback attempted to complete a pass wide receiver Odell Beckham Jr. Mayfield exited the game after the play and underwent X-rays at halftime.

“Hit the face mask obviously with a little bit of speed and force on that, trying to throw a long ball,” Mayfield said. “The X-rays were negative, so that’s good news. Just got a little numb, took some medicine and went back out there. So we’ll see.”

Mayfield was able to return and play the entire second half for the Browns, wearing a white glove on his throwing hand. Browns head coach Freddie Kitchens told the media postgame that Mayfield’s injury is “a contusion right now, a bruise.”

With their loss to the Steelers, the Browns dropped to 5-7 on the season.