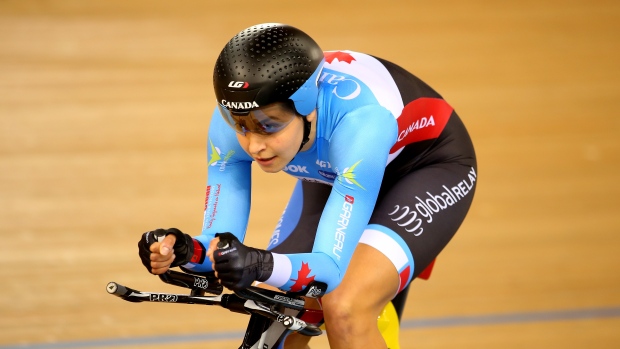 Early-morning intervals and quick rides between classes weren't in her plans, but over the past seven months, she's learned to appreciate her unique position as both an elite athlete and an aspiring doctor.

“I didn’t want to balance both but it’s been a really huge learning experience," Foreman-Mackey said. "In some ways, I think it’s protected me from some of the challenges in both the medical learner world and as an athlete during this uncertain time.”

Before the pandemic, Foreman-Mackey, was focusing on wrapping up her cycling career. She had numerous medals and titles to her name, including team pursuit gold at the 2018 Commonwealth Games and gold at the Pan American Games in 2019, where she also took silver in individual pursuit.

The Tokyo Olympics were going to be "a bit of a final dance," she said.

"I had been working toward these Games and I had everything in place to retire afterwards and I was feeling really at peace with that and kind of seeing the Games as a bit of a culmination of a great career that I could be proud of."

Then COVID-19 derailed her meticulous plans.

Foreman-Mackey and her team pursuit teammates returned from the world championships in Berlin in March 2020. They'd finished fourth, and Foreman-Mackey had come fifth in individual pursuit.

Now she could turn her attention to med school interviews, with three scheduled at universities across the country over a 10-day span. She landed in Calgary for the final interview to find an email saying it had been cancelled.

The women's team pursuit crew pivoted, moving its training camp from L.A. to Victoria. Foreman-Mackey and her teammate Allison Beveridge hopped in a car and road-tripped from Calgary to Vancouver Island. By the time they arrived, that camp had been cancelled, too.

Then came the announcement that the Olympics would be pushed back.

It was a tough time, Foreman-Mackey said, with the uncertainty of her athletic future compounded by the med school "waiting game."

"It was like all these different pieces of my life were so up in the air," she said.

The 29-year-old Foreman-Mackey, from Kingston, Ont., admits to being someone who likes to have a lot on her plate, so she set about finding new ways to stay busy during lockdown.

“There’s this saying that you can’t be sad and useful at the same time. I forget who said it, but it’s something that I try to embody when I’m in these places," she said.

The day after the Olympics were postponed, Foreman-Mackey and Beveridge — who'd both opted to stay in the Victoria Airbnb they'd rented for training camp — went on a 10-kilometre trail run. It was a stark departure from their normal training regime and a new way for the pair to stay active.

Foreman-Mackey put her master's degree in public health to use, working on a project about human rights in the pandemic, and co-authored a paper. She also worked with Cycling Canada to help keep other athletes updated on the latest news around training and competitions, and created a mentorship program over Zoom.

“Even though I didn’t have the answers, we were doing something to help cyclists within our community," she said.

Foreman-Mackey had a huge choice to make — could she pursue both her Olympic dream and her dream of becoming a doctor simultaneously? She'd already opted out of medical school once, turning down a spot at the University of Ottawa in 2018 to continue cycling, and knew her ultimate goal was to work in health care.

After talking with her coaches and teammates, friends and family, she decided to start full-time at UBC in the fall. The racing schedule was still unclear, so she committed to a single term, and left a decision on whether to take a leave of absence or go part-time on the horizon.

Attending to medical school during a global pandemic comes with its own challenges, Foreman-Mackey said. There is some clinic time, but she and her classmates spend about 10 hours a day in front of their computers.

“Medical school is super overwhelming, let alone trying to do it all over Zoom," she said. "So in some ways … it’s like I have a very good excuse to leave my computer and go out because I need to be training as much as I can. It forces me to have that balance that I think a lot of people are struggling with.”

Working toward the Olympics can be a grind, too. When Foreman-Macky is overwhelmed with cycling, she can turn her attention back to school.

“I don’t have to overthink that whole process because I have this other thing that’s grounding me," she said.

Training thousands of miles away from her teammates has required some modifications, though.

"I think it’s been a bit of a mental game for me," she said, explaining that after training solo in the fall, she realized that she thrives when she has someone else pushing her.

Foreman-Mackey has assembled some stand-in training partners — or "honorary teammates" — who help her squeeze in intervals between classes or come ride in the rain with her late at night.

She stays in touch with her Olympic teammates, and admits to being jealous of the photos they sent from training in Hawaii. Being so far away has made her realize what she took for granted when they were stuck together for long stretches on the road.

This month, as her semester ends and training for Tokyo ramps up, she'll rejoin her teammates for a final push to the Olympics.

Once again, the balance between cycling and school will shift. Foreman-Mackey said it's a balance that she doesn't always get right. For now, though, she's enjoying the ride.

This report by The Canadian Press was first published April 9, 2021.