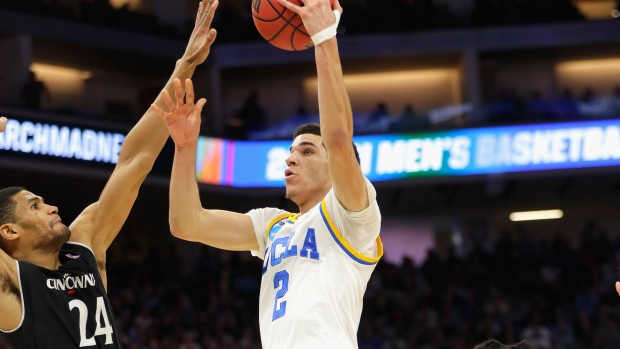 SACRAMENTO, Calif. -- UCLA had trouble getting its high-octane offence going in the first half against Cincinnati's big, athletic defenders.

Once the Bruins got rolling, there was no stopping them -- all the way into the Sweet 16.

Next up: A blue blood rematch with Kentucky in the South Regional semifinals.

Lonzo Ball scored 18 points and ignited UCLA's rally from a poor start with nine second-half assists, lifting the third-seeded Bruins to a 79-67 victory over Cincinnati on Sunday in the South Regional.

"I don't know of a more fun basketball team to watch when we're clicking and we've had a lot of games where we've been clicking," UCLA coach Steve Alford said.

UCLA (31-4) had a hard time solving sixth-seeded Cincinnati's active defence in the first half, unable to get shots to drop or get out in transition. The Bruins found a new gear in the second half, breaking out for dunks and dropping in strings of 3-pointers to quickly push the lead to double digits.

UCLA had 21 assists and three turnovers, earning its third Sweet 16 appearance in four seasons under Alford, erasing -- at least in part -- the 15-17 letdown of a year ago.

The Bruins will face No. 2 seed Kentucky in the South Regional semifinals Friday in Memphis. UCLA had one of its biggest wins the past two seasons against the then-top-ranked Wildcats in December, knocking them off 97-92 in Lexington.

"It's a very, very good basketball team," Alford said "I think they're better now in March than they were when we played them in December and I think we're better than what we were in December as well. Makes for a great matchup."

Cincinnati (30-6) had no real answer when the Bruins got rolling, falling short of their first Sweet 16 appearance since 2012. UCLA hit 19 of 30 shots in the second half, including 7 of 14 from 3-point range against the Bearcats.

"Once they got on a roll a little bit, they were running downhill," Bearcats coach Mick Cronin said. "Fatigue got us. It affected our defence."

This marquee matchup pitted the nation's highest-scoring team against one of the best defensive teams.

UCLA led the nation in scoring at 90.6 points per game and assists with 21.6 a game. The Bruins rolled to 97 points in their opening win against Kent State.

The Bearcats are ranked fifth nationally in scoring defence at 60.8 per game and 11th in adjusted defensive efficiency in KenPom.com's calculations.

Cincinnati showed off its offensive abilities in its opener, hitting a school NCAA Tournament-record 62 per cent from the field, while UCLA continued its season-long struggles at the defensive end to allow Kent State to keep their first-round game close until late.

The Bearcats got the best of this clash of styles in the first half, holding the Bruins mostly in check while continuing their good shooting from the opener. Cincinnati hit 12 of 24 shots and led by six points, but UCLA showed some offensive life late in the half to pull within 33-30.

"The first half was obviously at Cincinnati's pace," Alford said.

The Bruins found their groove to start the second half, getting out in transition and knocking down 3-pointers.

Ball hit two straight 3s, then Bryce Alford dropped in another. In a matter of seconds, UCLA was up 55-47.

"We could get some shots to fall and then on the other end they were making some shots," said Cincinnati's Jacob Evans, who had 13 points. "That's just how it went."

Cincinnati's season ended with a thud, but the Bearcats finished with their second 30-win season as a program and were one short of the school record for victories.

UCLA can be an unstoppable force when it gets rolling on offence. The Bruins tightened up defensively in the second half as well, making them looking like a formidable threat to get through Memphis to the Final Four.

UCLA had to play its first-round game without Ike Anigbogu after the freshman forward sprained his left foot in practice last Tuesday. He returned for Sunday's game and provided the Bruins with good energy off the bench, hitting both his shots to score six points.

UCLA moves on to face No. 2 seed Kentucky in the South Regional semifinals Friday in Memphis.