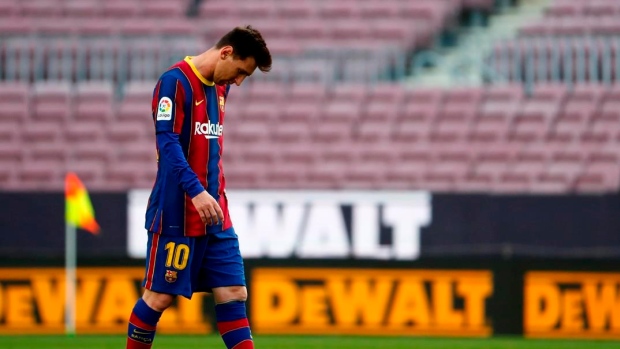 Barcelona president Joan Laporta admitted on Friday that he and the club hoped Lionel Messi would stay and play for free before departing for Paris Saint-Germain in the offseason.

Messi left Camp Nou after two decades when even cutting his wages in half couldn't satisfy La Liga financial requirements.

"There was disappointment on both sides," Laporta said told radio station RAC1. "I hoped Messi would do a U-turn and he would say he would play for free. I would have liked that and I would have been all for it. It is my understanding La Liga would have accepted it. But we cannot ask a player of Messi's stature to do this."

During the interview, Laporta also gave a vote of confidence to embattled manager Ronald Koeman with Barca sitting ninth in the table and winless in the Champions League, after back-to-back embarrassing 3-0 defeats to Bayern Munich and Porto, respectively.

"I asked him if he trusted the team and he said, 'Of course I trust them, I need to get the injured players back,'" Laporta said of Koeman. "He wants to continue at all costs and show this team is competitive."

Barca returns to league action following the international break on Oct. 17 with a home date against Valencia.