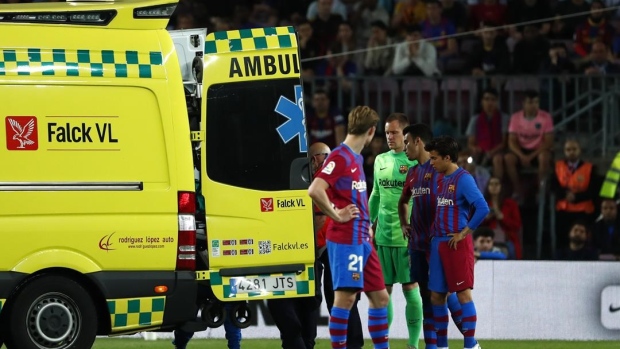 BARCELONA, Spain (AP) — Barcelona defender Ronald Araújo was taken off the field in an ambulance after clashing heads with a teammate and collapsing on Tuesday.

The Uruguay defender “has suffered a concussion and has been taken to the hospital to undergo further testing," the club said on Twitter. He appeared to be conscious as he was put into the ambulance.

Araújo collapsed after clashing heads with Gavi Páez as both players went for a ball in the 61st minute against Celta Vigo at the Camp Nou Stadium. The defender seemed OK at first but went down to the ground after taking a few steps.

Barcelona and Celta players immediately called for medical assistance and turned him on his side. Araújo appeared to be unconscious for a few moments as doctors rushed in. He was treated for nearly eight eight minutes as doctors immobilized the defender before putting him in the ambulance.

Gavi also needed medical assistance but was able to return to the match, which Barcelona won 3-1.

“It’s scary when something like this happens,” said forward Pierre-Emerick Aubameyang, who scored twice for Barcelona.