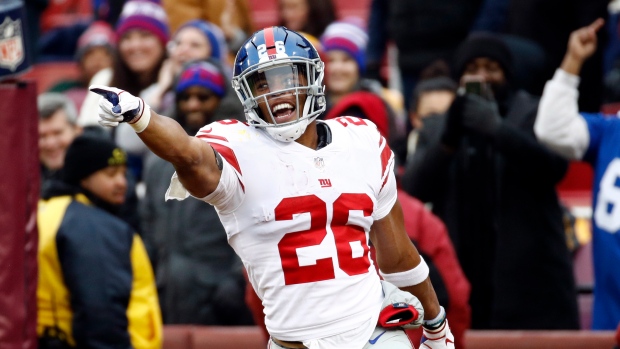 EAST RUTHERFORD, N.J. — Saquon Barkley has been cleared to return to the New York Giants' lineup for Sunday's game against the Arizona Cardinals.

Last year's offensive rookie of the year has not played since spraining his right ankle on Sept. 22 against the Tampa Bay Buccaneers.

Barkley rushed for 237 yards with a 6.4-yard average and a touchdown in the Giants' first 2 1/2 games. He has since missed three games and the running game has slowed without him.

Wide receiver Sterling Shepard and rookie cornerback-kickoff returner Corey Ballentine are going to miss the Arizona game with concussions. It will be the second straight for Shepard, who now has had two concussions this season. Ballentine was injured in the last game.

Running back Wayne Gallman and defensive tackle Olsen Pierre practiced fully Friday. They are in the concussion protocol and must meet with an independent neurological consultant to receive final clearance to play. Gallman was injured against Minnesota on Oct. 6 and Pierre was injured four days later against New England.