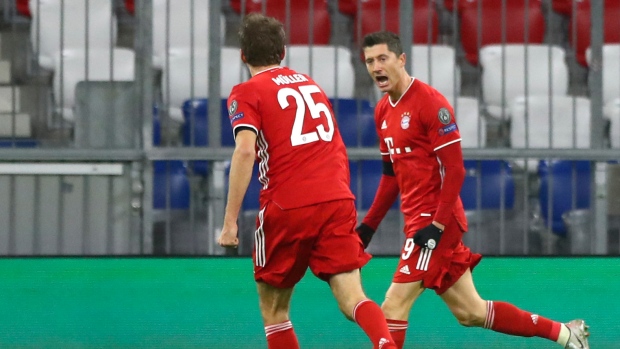 MUNICH — Robert Lewandowski scored again to help Bayern Munich reach the knockout stages of the Champions League with a 3-1 win over Salzburg on Wednesday, the defending champion’s record-extending 15th straight win in the competition.

Bayern’s 20-year-old American defender Chris Richards started for his Champions League debut, taking the place of Lucas Hernández on the left. Richards switched to the right when Hernández, who picked up a knock in his previous game, came on in the 62nd.

Spanish midfielder Marc Roca also made his first European start for Bayern. But the former Espanyol midfielder, who had made only one Bundesliga appearance since joining in the off-season, was sent off in the 66th minute with his second yellow card for a late challenge on Zlatko Junuzovic´.

The game was preceded by a minute’s silence in the largely empty stadium for Argentina great Diego Maradona, who died earlier Wednesday. No fans were at the game due to coronavirus restrictions.

The Austrian champions took the game to their hosts but were unable to capitalize on the spaces and chances they created.

Dominik Szoboszlai could have scored on a counterattack in the 35th minute but fired well over when he only had goalkeeper Manuel Neuer to beat.

Salzburg was to rue its lack of efficiency when Lewandowski broke the deadlock. The Poland striker set up Thomas Müller with his heel, and was in the right place to fire in the rebound after Cican Stankovic´ saved his teammate’s effort.

Bayern needed some luck for the second goal. Leon Goretzka did well to win the ball and Kingsley Coman cut past a defender before his shot was deflected in by Salzburg defender Maximilian Wöber in the 52nd.

Bayern has 12 points from four games in Group A, seven more than Atlético Madrid, which was held 0-0 by Lokomotiv Moscow. Bayern next visits Atlético on Dec. 1 before completing the group at home against Lokomotiv on Dec. 9.