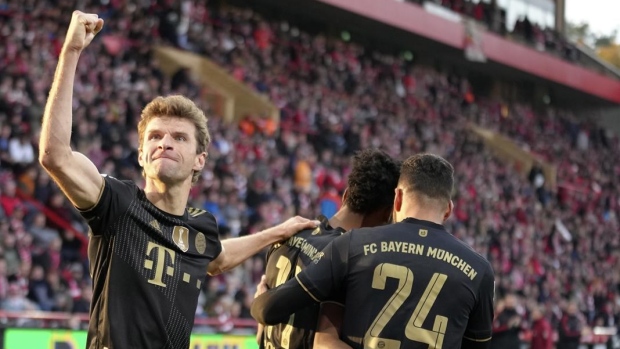 BERLIN (AP) — Robert Lewandowski scored twice as Bayern Munich restored some lost pride with a 5-2 win at Union Berlin in the Bundesliga on Saturday.

Bayern was smarting from Wednesday’s 5-0 loss at Borussia Mönchengladbach in the cup, and it rebounded by ending Union’s 21-game unbeaten run at home in the league.

It was a clinical performance from the table-topping visitors, with Lewandowski starring early on and Leroy Sané getting the third goal, before Kingsley Coman and Thomas Müller made sure of the result after Niko Gießelmann and Julian Ryerson had kept Union’s hopes alive.

Union fans had been waiting more than two years to see their team host Bayern at the Stadion An der Alten Försterei since earning promotion in May 2019. Bayern’s previous two games in Berlin's eastern borough of Köpenick were played without fans present due to coronavirus restrictions. Some 16,500 were allowed Saturday despite rising infection rates for Union’s biggest crowd since the pandemic started.

Bayern coach Julian Nagelsmann, who remained away for the fourth game due to his own coronavirus infection, made four changes to the team that slumped to Bayern’s biggest defeat in 43 years on Wednesday. Niklas Süle started in place of the overwhelmed Dayot Upamecano. Assistant coach Dino Toppmöller again took charge from the sideline.

Nagelsmann will have been pleased with Bayern’s opening 35 minutes, with the team cruising after a penalty and free kick from Lewandowski before Sané made it 3-0.

It threatened to become a rout as the visitors were first to every ball and the home team struggled to keep up. But the Union fans never stopped singing and the players responded toward the end of the first half.

Gießelmann pulled one back in the 43rd, a minute before the stadium erupted again when Sheraldo Becker scored another. That goal was chalked off for offside, but it served as a warning that Union wasn’t beaten yet.

The roles were reversed after the break with Union dominating and pushing for more until Coman struck a brilliant goal on Bayern's counterattack in the 60th.

But Ryerson pulled one back in the 64th, set up by fellow substitute Kevin Behrens seconds after they came on.

Bayern made three substitutions in response, with one of them, Upamecano, setting up Müller for the fifth to seal it in the 79th.

Union’s fans kept singing, happy despite the loss of the team’s unbeaten run. It was more important just to be back.

Brazilian defender Tuta scored with the last touch in injury time to earn Eintracht Frankfurt a 1-1 draw with visiting Leipzig in the late game.

Emil Forsberg should have sealed the result for Leipzig minutes before, but he fired over.

Leipzig's goal came from a corner that should not have been awarded in the first half. Leipzig’s Josko Gvardiol was last to touch the ball before it went out of play but the corner was awarded despite Frankfurt's protests and Yussuf Poulsen duly scored when Willi Orban sent the corner on.

The draw will ease the pressure on Frankfurt coach Oliver Glasner after a difficult start to the season.

Goals either side of halftime from Thorgan Hazard and Steffen Tigges were enough for Borussia Dortmund to overcome Cologne 2-0.

“We ran a lot and won more challenges, but Cologne was the better team with the ball,” Dortmund coach Marco Rose said.

Dortmund again missed the influence of star striker Erling Haaland, out for the second spell this season, this time with a hip injury.