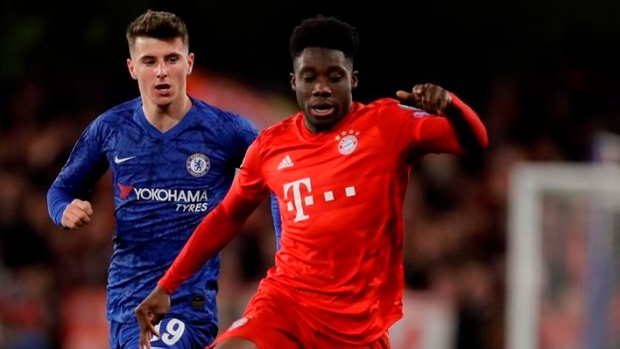 Bayern Munich has secured Canadian soccer star Alphonso Davies for another two years through June 2025, with club officials and the teenager donning surgical masks to ink the deal during the global pandemic.

The Bayern website carried a photo of the 19-year-old from Edmonton signing the contract extension with CEO Karl-Heinz Rummenigge, sporting director Hasan Salihamidzic and executive board member Oliver Kahn spaced around a boardroom table complete with a Davies jersey and the number 2025.

"I am very happy," Davies said in a statement. "FC Bayern is one of the best clubs in the world, and for me it's a dream come true to play here. I felt happy from Day 1.

"I want to win as many titles as possible with this club. The mentality of always wanting to win everything is in FC Bayern's DNA."

"It's a perfect environment for Alphonso," he said of Bayern. "This year he was really able to, I think, make a statement in that league with the consistency and also the continual growth you've seen."

An attacking winger who has found a home as a marauding left back for Bayern, Davies has become a fixture for the German powerhouse this season.

Herdman called Davies' standout performances in the Champion League "a big benchmark for a young player."

Davies is also a key player for Canada with five goals and seven assists in 17 appearances, playing both as a left back and winger.

"What we see with Alphonso is that he's building that level of flexibility and he's mastering the craft," Herdman said in an interview. "He's now becoming a master of defensive organization and I think that was a big part of his growth.

"So whether we deploy him as a left winger, a left back, a left wingback, the critical part is he's already developed a deeper understanding of his craft. And I think that's only going to stand him in good stead as we move forward.

"Just being in that Bayern Munich environment, week-in, week-out, day-in, day-out, the pressures that are put on a player (there), it doesn't really matter where he plays, it's the ability to handle pressure that I feel is the most important part of Alphonso's experience. And he's doing it brilliantly."

Davies was signed by Bayern from the Vancouver Whitecaps in the summer of 2018 in a US$22-million transfer deal, an MLS record at the time. He started to train with his new team in November after the end of the Whitecaps season.

"Alphonso has developed very well at FC Bayern and has earned this contract extension with his impressive performances," said Rummenigge, like Kahn a club icon. "We are happy that he will remain with FC Bayern in the long term. He delights our fans not only with the way he plays, but also with the way he is off the pitch."

Davies has made 31 competitive appearances for the German league leaders this season, with one goal and eight assists. Last season, he was part of the Bayern team that won the Bundesliga title and DFB Cup, and was also part of the Bayern reserves squad that was promoted to the third division.

"Alphonso Davies is a player who has already achieved a high level of performance at a young age and at the same time still has great potential for development," said Kahn. "Anyone who can consistently play at the top level at FC Bayern at such a young age can have a great career ahead of them."

Added Salihamidzic: "With his speed, his enthusiasm and his professional attitude, Alphonso is an ideal fit for our team. He is also a real asset in human terms."

Davies' life story is inspirational. His parents fled their home in Monrovia, Liberia, to escape a civil war, ending up at a refugee camp in Ghana where Davies was born.

He came to Canada at the age of five.

Davies shared his story at the FIFA Congress in Moscow in June 2018 as part of the joint North American bid to host the 2026 World Cup. Canadian soccer official credit his powerful presentation for helping push the bid over the finish line.