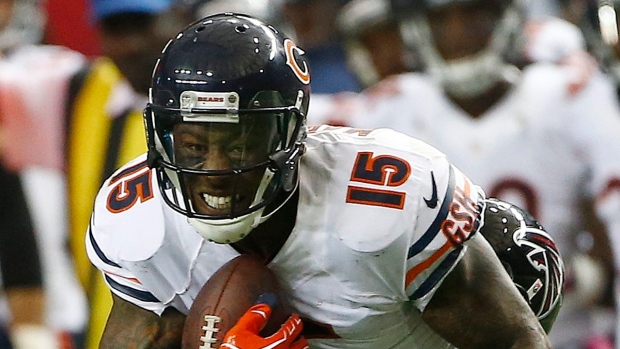 Chicago, IL - Chicago Bears wide receiver Brandon Marshall was taken by ambulance to a hospital after suffering an injury to his ribs in the first half of Thursday's loss to Dallas.

Marshall was injured on a 15-yard catch with seven minutes remaining in the second quarter when the left knee of Cowboys safety Barry Church hit him in the middle of his back.

The receiver walked gingerly off the field after laying on the ground for several minutes and went to the locker room.

Later, the Bears said he would not return to the game and the NFL Network broadcast showed Marshall sitting in the back of an ambulance as it drove away.

He later tweeted that he was "good." NFL.com reported that the Bears fear he has fractured ribs and that his season is in doubt.

The fourth-down catch deep in Dallas territory that Marshall was injured on led to a Bears touchdown and a 7-7 tie. He also had a 42-yard reception on the drive after tipping the ball to himself in traffic over the middle of the field.