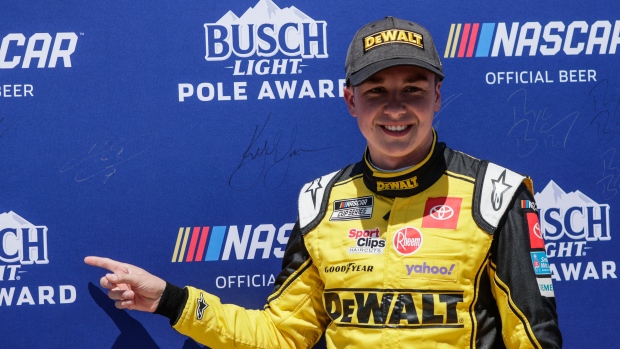 KANSAS CITY, Kan. (AP) — Christopher Bell qualified on the pole for Sunday's race at Kansas Speedway, topping the time set by Tyler Reddick earlier in the session and grabbing his third pole of the NASCAR Cup Series season for Joe Gibbs Racing.

Bell turned a lap of 179.575 mph Saturday in the first showcase of the Next Gen car at the mile-and-a-half oval west of downtown Kansas City. That was enough to beat Reddick, who went 178.855 mph for Richard Childress Racing, and add to the poles that Bell won at Las Vegas and Talladega.

Now the trick is to do something with it. Bell finished 10th in the desert and 22nd a few weeks ago in Alabama.

“These guys are just doing a really good job on this 20 car and have been all year. Really proud of the effort,” said Bell, who has been chasing his second win in NASCAR's top series since winning on the road course at Daytona in February 2021.

“Hopefully,” Bell said with a smile, “we can keep it up tomorrow.”

Betting favorite Kyle Larson qualified third for Hendrick Motorsports and will start in the second row alongside Austin Cindric, the best of the Team Penske cars. Kurt Busch made it five different teams in the first five spots for 23XI Racing, while Kyle Busch qualified sixth and Aric Almirola was seventh for Stewart-Haas Racing.

Alex Bowman, Martin Truex Jr. and Ryan Blaney rounded out the top 10 on a brutally hot afternoon at Kansas.

“We have everything we need to win races,” said Bell, who will try to become the 11th different driver through the first 13 races to clinch a playoff spot with a win. “Our cars have been super fast. We just have to maintain our track position. We've really, really struggled on pit road, and that's one of the reasons we're not contending for wins. If we can get our pit road struggles under control, we'll be contending for sure.”

Last week's winner at Darlington, Joey Logano, along with Ricky Stenhouse and Chris Buescher had problems with left rear tires and found the wall in practice. None were able to qualify and all of them will start near the back Sunday.

“I turned off the corner, I could feel it shaking and I knew it was bad,” Logano said. “We'll have to come from the rear but we'll be all right. We'll fight through it. I think we were pretty decent on lap times before it.”