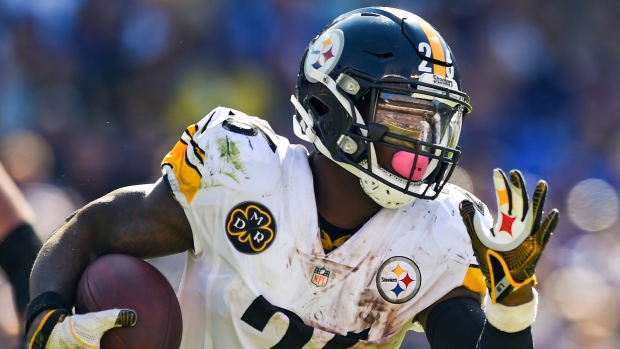 FLORHAM PARK, N.J. — The New York Jets hit the field together for the first time this off-season — without their star running back.

Le'Veon Bell was not among the players present Tuesday for the start of the team's voluntary three-day minicamp. Linebacker Darron Lee, whose role with the team is uncertain, was also not on the practice field.

Coach Adam Gase appeared unconcerned, though, downplaying the fact neither was present.

"It's voluntary," Gase stressed. "(Bell) was here that first week (of off-season workouts), and we got a lot of good information that week to him."

According to the NFL's collective bargaining agreement, teams with new coaches are allowed to hold a voluntary minicamp early in the off-season program. Teams also hold 10 sessions of organized team activities, which are also voluntary. The Jets' mandatory minicamp begins June 4.

Gase said Bell, signed as a free agent last month, was with the team during the first week of off-season workouts, and Lee has also been at the facility.

The coach added that players who might not attend a voluntary session can remotely keep up to date on what the team is doing through the playbooks on their iPads.

Bell not being at the on-field session Tuesday was magnified mainly by the fact he hasn't participated in a practice since the 2017 season with Pittsburgh. He sat out all last season after declining a five-year, $70 million offer from the Steelers and then refusing to sign his $14.5 million franchise tender.

The Jets signed him to a four-year, $52.5 million deal that includes $27 million in guaranteed money. During a conference call last month, Bell said he was happy to begin a new chapter in his career and would be physically ready to go when the season starts.

"He has a pretty good training regimen that he goes through," Gase said. "He knows how to get his body ready for training camp and the regular season. He's been doing this for a minute."

While Bell will be the clear starter this season as a playmaker out of the backfield, Lee's status with the Jets is murky.

The linebacker's name has been mentioned in trade speculation leading up to the draft. He has started at inside linebacker the past three seasons since being drafted in the first round out of Ohio State in 2016, but the Jets signed former Baltimore star C.J. Mosley last month to team with Avery Williamson at that spot.

Lee is due $1.8 million this year and the Jets must decide by May 3 whether to exercise their fifth-year option on his contract for next season.

Lee has not performed up to expectations since being the 20th overall pick, but showed some improvement last season with the first three interceptions of his career — including one returned for a touchdown. But he was suspended the final four games by the NFL for violating the league's substance abuse policy.

"Once again, it's voluntary," Gase said. "It's not one of those things where we're going to spend a ton of time asking questions. The guys that show up, we're going to try to help get better."

NOTES: Gase is having the offence and defence practice separately during the voluntary minicamp instead of pitting them against each other this early in the off-season. "We just thought it was the best process for us, really," Gase said. "We're only two weeks into the off-season program. To me, it's like, we want these guys to get comfortable with what we're doing, how we do it, the structure of practices. It's a little bit different from what some of these guys are used to." ... DL Leonard Williams on new defensive co-ordinator Gregg Williams, whose intense approach has been well-documented during his several NFL stops: "I love guys like that. I love those high-intensity, get-after-it type of coaches that really know how to push you and get the best out of you. ... I'm looking forward to playing for him." ... QB Sam Darnold said working with Gase is "awesome" and he has learned a lot already from the Jets' new coach, including how Gase prepared the Dolphins last year to face the young quarterback. "Yeah, he was like, 'This is what we picked on you, this is how we wanted to defend you, this was kind of our mindset going into the game because we knew you were on the other side of the ball,'" Darnold said. "Designing a game plan to go against me, hearing his thoughts on that and what head coaches are kind of thinking going against me is very interesting."