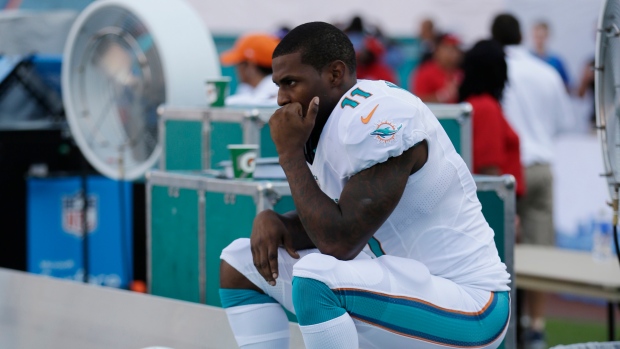 The $15 million receiver didn't want to talk about his argument with coaches at halftime, or his benching that followed, or his team's second-half collapse in a 37-24 loss to the woebegone New York Jets.

Wallace had teammate Brandon Gibson speak for him, which created a bizarre scene as they stood side by side at their lockers after the game.

Why was Gibson doing the talking?

"I just don't want my dog to say anything wrong," Gibson said. "Differences in opinion led to Mike not playing in the second half, so that's what we're going to say about coaches. ... Things that were communicated probably were misunderstood."

Idle for the entire second half, Wallace was held without a catch for the first time since his rookie year in 2009. That made things easier for the Jets, who overcame a 10-point third-quarter deficit.

The Dolphins (8-8) missed a shot at their first winning season since 2008, which is the last time they made the playoffs. Owner Stephen Ross has said coach Joe Philbin will be back for a fourth season in 2015, and he'll have disharmony to address after benching Wallace.

Philbin said the move was a coach's decision, and he declined to elaborate. Wallace has three years remaining on a $60 million deal he signed in 2013.

"I plan on being a Dolphin as far as my contract allows me," Gibson said, speaking for Wallace. At the end of the interview, Wallace confirmed his feelings were accurately represented by Gibson's comments.

It was a weird end to a strange day for the Dolphins, who lost despite impressive performances by Lamar Miller and Ryan Tannehill.

Miller scored on a franchise-record 97-yard run and rushed for a career-high 178 yards. Tannehill became the first Miami player since Dan Marino in 1994 to throw for 4,000 yards, and with 392 completions for the season, he broke Marino's 1994 franchise record of 385.

But the Jets sacked Tannehill seven times, and Miami's defence was again awful, leaving defensive co-ordinator Kevin Coyle's job in jeopardy. The Jets' Geno Smith had his best game in a rocky season, throwing for a career-high 358 yards and three touchdowns.

"I hate losing," Tannehill said. "I put in a lot of effort, a lot of time, a lot of blood, sweat and tears. Everyone in this locker room does as well. Any time you don't come out and finish the way you want to, it hurts."

The game was entertaining but mostly meaningless because it involved two teams out of the playoff chase. And with the Jets sitting out the post-season for the fourth consecutive year, owner Woody Johnson is widely expected to fire coach Rex Ryan, and perhaps general manager John Idzik.

"This is a great team — just we haven't had a great record," Ryan said. "But as far as how you build a team, it's there."

The half-empty stadium and also-ran status of the teams created the atmosphere of an exhibition game, and with the stakes modest, Ryan threw in an occasional frill. The Jets ran a reverse out of the wildcat, with receiver Jeremy Kerley throwing incomplete to Smith.

The coach ordered a fake punt when New York clung to a 27-24 lead, and punter Ryan Quigley lobbed a 38-yard pass to tight end Zach Sudfeld on fourth-and-12.

"Somebody had the guts to call it," Ryan said. "I don't know who, but he's probably standing in front of you."

On the next play, Smith hit Jeff Cumberland with a 23-yard pass for the clinching touchdown.

New York came in ranked last in the NFL in passing, but Smith went 20 of 25 and had a passer rating of 158.3 — the only perfect rating this year by a quarterback throwing at least seven passes, according to STATS. The South Florida native helped the Jets achieve a season-high points total.

Even so, the game might have been Smith's final start for the Jets. They're expected to seek quarterback help in the draft or free agency.

"I have complete confidence in myself," Smith said, "but consistency is the thing that I'm searching for and I'm getting better with."

NOTES: Miami LB Koa Misi left with a right knee injury in the third quarter. ... The longest previous run for Miami was 77 yards by Leroy Harris in 1977 and Keith Byars in 1993.