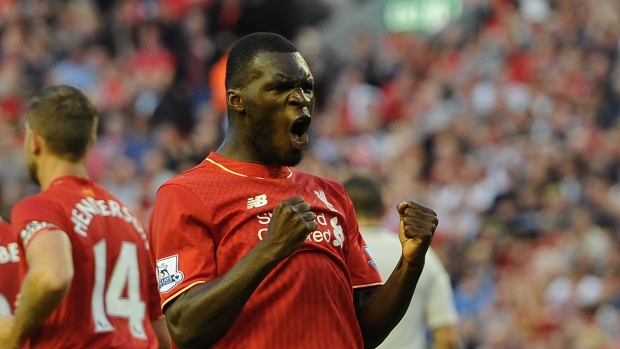 LIVERPOOL, England - Christian Benteke scored his first Premier League goal for Liverpool on Monday to give his new team a 1-0 win over promoted Bournemouth in a game that was marked by two disputed refereeing decisions.

Benteke met a cross at the far post for an easy tap-in in the 26th minute, although the goal was questionable as Philippe Coutinho had tried to reach the ball first from what was a clear offside position.

Benteke was bought from Aston Villa in the off-season to provide more of a presence up front for Liverpool, and the Belgium striker also hit the bar from close range in the 90th minute.

"It's a good debut for myself and for the team," Benteke said. "It's a great feeling, it's important for the confidence."

Bournemouth fell to its second straight 1-0 loss to start the season after having an early goal ruled out, when Tommy Elphick was adjudged to have fouled Dejan Lovren before heading the ball into the net.

"For me it's a goal," said Bournemouth manager Eddie Howe. "He's competing and wrestling, but if that's a free kick we're going to be seeing a free kick given every time there's a corner."

The Liverpool goal, meanwhile, was allowed to stand despite Coutinho seemingly interfering with play from an offside position. Jordan Henderson swung in a cross from the left and Coutinho tried to get his foot on the ball but missed — freezing goalkeeper Artur Boruc and leaving Benteke free at the far post to tap into an empty net.

Under new rules implemented for this season, players can be flagged for interfering with play even if they don't touch the ball.

"Under the new rules that's clearly offside. Clearly our goalkeeper was affected by the movement in front of him," Howe said. "It was hugely frustrating for us tonight. ... The big decisions have gone against us."

Liverpool also won 1-0 at Stoke in the opening round and is one of four teams with six points from the two opening rounds, along with both Manchester clubs and Leicester.