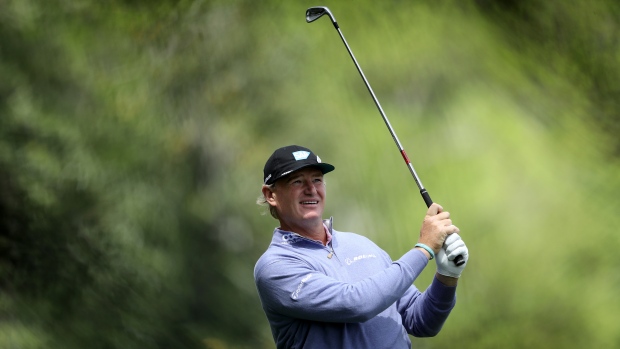 Ernie Els struggled in his debut on the 50-and-over tour, shooting a 72. The four-time major winner from South Africa turned 50 in October.

Langer and Jimenez closed with birdies on the par-4 18th at breezy Hualalai Golf Course. Langer had nine birdies and a bogey.

“I had a wonderful day — start with a birdie, finished with a birdie and really played solid golf," Langer said. “I made one stupid bogey. We make good bogeys and we make terrible bogeys. I had a pitching wedge from middle of the fairway and made bogey, so that doesn't feel good, but it happens.

“Obviously, I'm 62, so getting up there in age," Langer said. “The young guys coming out like Ernie Els and Retief Goosen and many others who hit it 20, 30, maybe 40 yards by me. So, it's going to get harder, but I still believe that I can improve and compete at the highest level."

Jimenez, the 56-year-old Spaniard who won in 2015, had eight birdies in a bogey-free round.

“Playing very well, very solid. I miss just a couple of shots, but I'm not used to the distance,” Jimenez said. “I make good up-and-downs and then chances for birdie. I make my birdie and here we are."

Tom Watson and John Daly shot 69, and defending champion Tom Lehman had a 71.

Els was tied for 30th in the 37-player field. Paired with Couples, Els had four birdies, two bogeys and a double bogey.