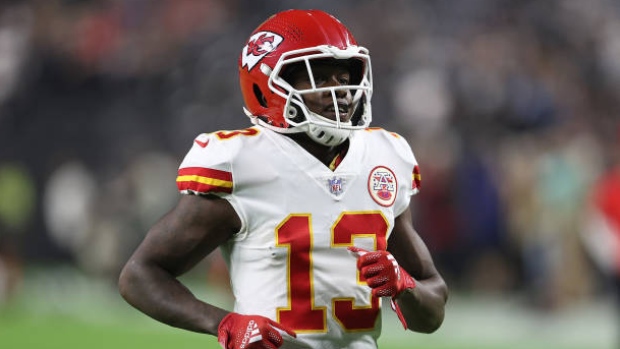 Those five teams are a combined 6-8 SU since.

Those splits are one of many disparities we can point to in an effort to illustrate what we have seen in the NFL over the past three weeks.

NFL underdogs went a combined 28-12-1 against the spread from Week 8 through Week 10, including each of the six outright upsets by underdogs of 7.5 points or more this season.

Quarterback play is among the biggest factors we can point to for the recent parity.

That’s the worst Total QBR over any three-week span since that metric was first tracked in 2006.

The New England Patriots opened the week with a lopsided win and cover in a 25-0 victory over the Atlanta Falcons as a seven-point favourite on Thursday Night Football.

Will we see some regression from the favourites on Sunday?

Or will the dogs continue to bark?

Here are some of our best bets for Week 11 in the NFL.

The total for Sunday’s showdown between the Kansas City Chiefs and Dallas Cowboys is set at 56, which is the highest number on the board for Week 11.

It’s projected to be the highest-scoring game of the week for good reason.

The Chiefs and Cowboys rank first and second in the league in average yards per possession, respectively.

Patrick Mahomes threw for a season-high 406 yards and five touchdowns in last week’s win over the Las Vegas Raiders, including four completions to Byron Pringle for 46 yards and a touchdown.

Pringle ran a pass route on 66.7 per cent of Mahomes’ dropbacks, outpacing both Mecole Hardman and Demarcus Robinson.

While Travis Kelce and Tyreek Hill are the top weapons, and Darrel Williams will get his fair share of targets, Pringle should get three or four looks in a game that should feature plenty of offence.

Considering he’s gone over 45 receiving yards in three of his last four games, including gains of 22, 25 and 27 in those contests, I feel pretty comfortable trusting him to go over 30.5 receiving yards versus Dallas.

I still think Hill is worth a look, and I’ll be keeping an eye out for a Williams prop before game time, but at this point I’ll lock in Pringle to go over 30.5 receiving yards as my best bet for Week 11.

Week 11 brings us another chance to fade the Arizona Cardinals. The Kyler Murray will he or won’t he play saga continues, as the former No. 1 overall pick will once again be a game-time decision on Sunday versus the Seattle Seahawks.

The Cards are currently listed as a 2.5-point favourite and this can go one of two ways. Murray doesn’t play, which seems likely since Arizona is on bye next week and will retain first place in the NFC West regardless if they win or lose. Or he does play, at less than 100 per cent.

Murray’s biggest asset is his mobility, which is obviously still hampered by his injured ankle. If his world-class elusiveness is even slightly limited, the Cardinals offence is nowhere near as dangerous.

If Murray sits, this line will likely shift heavily towards the Seahawks, which makes locking in Seattle at +2.5 a no brainer decision.

Also working against Arizona is the continued absence of No. 1 receiver DeAndre “Nuk” Hopkins. Nuk is out versus the Seahawks and, quite frankly, the pass-catching trio of Christian Kirk, A.J. Green and Rondale Moore isn’t all that frightening.

Seattle, meanwhile, is fresh off an embarrassing loss at Green Bay, but have been cover machines following outright defeats in the Russell Wilson era. With Russ under centre, the Seahawks are 27-14-4 against the spread after a loss.

Wilson and the Seahawks are also extremely dangerous as an underdog, covering the spread in 24 of 38 opportunities, including six of nine games at home.

I had a feeling last week, a feeling that a big underdog would not only cover but win outright.

And my oh my how awesome it felt to cash those Carolina Panthers +410 moneyline and +10.5 tickets.

Well, this week we’re back and I’m calling my shot again.

The Indianapolis Colts are going to walk into Highmark Stadium as seven-and-a-half point underdogs and emerge with a victory.

Let me tell you why.

The Colts enter this game 5-5, but their record only tells half the story.

Indy could just as easily be 7-3 if it weren’t for a few gutting losses.

Jonathan Taylor has emerged as one of the best running backs in the league and is averaging 122 yards rushing per game since Week 6.

And the Colts defence has been very opportunistic this season and leads the league with their 11 fumbles recovered.

The Colts have already shown their ability to win a big game on the road this season when they beat the San Francisco 49ers as underdogs in Week 7.

Against the spread they have been solid all season and are 6-4 ATS, but an even better 3-1 on the road as underdogs.

Meanwhile, despite being 6-3 on the season, Buffalo is 5-3-1 ATS and have covered in two of their four home games.

On top of that, the Bills have been favourites in their last four games, and have covered the number just once.

Last year the Colts season ended in Buffalo during Wild-Card Weekend in a 27-24 loss.

This year they get their season back on track with a big upset win.

For the purpose of this article, we’re going to play it safe and take the points.

But I’ll be taking a hard look at +260 on the moneyline as well.