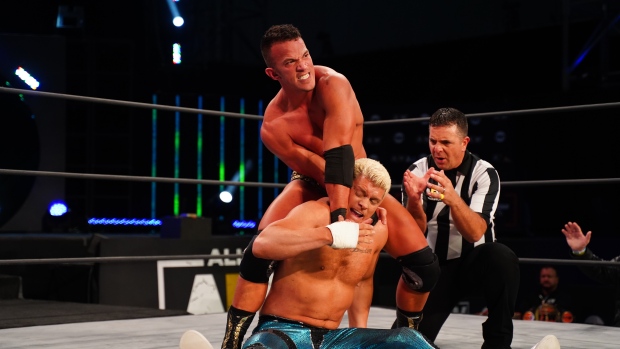 Ricky Starks understands why pro wrestling fans might see him as an overnight sensation.

Since his debut with All Elite Wrestling in June, the smooth-talking New Orleans native has enjoyed a quick rise to prominence and become a mainstay on AEW programming as a charter member of Team Taz.

But the truth of the matter is, Starks’ rise has been a decade in the making.

“It took me 10 years to become an overnight success is what I tell people,” Starks told TSN.ca. “That’s a saying that I really took to heart when I heard it the first time. There’s nothing that I could have predicted or even imagined how things would have turned out talking to you today because back at the end of April, end of March, I really didn’t know. It’s amazing to me and I still can’t get over it. There are times when I’m by myself and I catch myself and have this epiphany where I’m like, ‘This is insane.’ It’s insane to see how things have happened so far.”

You can catch AEW Dynamite on Wednesday at 8pm et/5pm pt on TSN2, the TSN app, streaming on TSN Direct and on TSN.ca.

Making his professional debut in 2011, Starks spent much of the last decade based out of Texas and working for a variety of promotions in the state. Though he did some enhancement work with World Wrestling Entertainment over the years, his first steady national exposure came in 2018 when he began working for Billy Corgan’s National Wrestling Alliance. By early 2020, Starks had become the promotion’s National TV Champion. But for Starks, the NWA was never supposed to be more than a temporary stop on his pro wrestling journey.

“I didn’t plan to stay there for a long time,” Starks said. “I gave myself a six-month or eight-month plan to really stay and then use that as a jumping-off point for me to get things going. I wasn’t getting paid a lot in NWA, so I was barely making it by off the salary that I was on. On top of that, once the pandemic hit and they weren’t really trying to increase my pay, they were going with a new TV show called Carnyland (a faux-reality show without any actual wrestling) that I didn’t necessarily agree with. That was really just the writing on the wall for me to step away from it and try something else. It was a bit scary to try something else, especially because of the fact that we just started in the pandemic, so the timing [wasn’t great.]”

Betting on himself, Starks’ professional gamble to leave the NWA in the spring was rewarded in early June. Then the AEW TNT Champion, Cody Rhodes, had issued an open challenge to wrestlers both inside and outside of AEW for title matches on Dynamite. Starks would get a call.

“I watched on Wednesday when Cody made the challenge and then Thursday, I was at the gym and I had this – I wouldn’t say premonition, but this vision of how I came out and how I cut this promo on Cody,” Starks said. “And I couldn’t shake it. Then on that following Sunday, I got hit up by AEW, asking if I wanted to do the open challenge and by the following day, I had all my stuff set up and I was ready to go. So it happened pretty quickly and to me, I thought it was just going to be a one-off thing, but obviously we’ve seen how that turned out.”

The performance turned in by Starks on the June 11 edition of Dynamite was enough to impress AEW brass and he received another call.

“The match aired on a Wednesday and literally right after that match, I got a phone call from [AEW president] Tony Khan and we went over everything and he offered me something and it was pretty much a done deal from there,” Starks said.

Now six months into his AEW career, strong promos have quickly become a hallmark for Starks, something he says he learned he had a knack for outside of wrestling.

“I think it was when I had to talk myself out of situations that I had got myself into in the first place when I was younger,” Starks said of when he knew he had the gift of gab. “The thing is, I like talking even outside of wrestling. I just say a bunch of stuff and go off on tangents. It’s basically influenced from when I lived in New Orleans. I grew up around a lot of older people who would talk in such a way that they had this cadence and this delivery about them. Usually, that’s what I’m mimicking when I cut promos. So it wasn’t until I got into wrestling that I was really like, ‘Oh, wow, maybe I do have the ability to talk.’”

Growing up a wrestling fan, Starks cites Steve Austin’s memorable promos in Extreme Championship Wrestling as some of his favourite mic work, but says that it wasn’t until he broke into the industry that he started delving into the past for inspiration.

“When I got into wrestling, I started to go back deeper, actually,” Starks said. “Thunderbolt Patterson is a good person to look at as far as promos go because his style is found in people like Booker T. and The Rock.”

But there’s also immediate inspiration for Starks in the form of his on-screen advisor, Taz. Starks, Brian Cage and Will Hobbs comprise the heel faction of Team Taz with the ECW icon as its leader. Starks can’t help but be impressed with how the man once known as “The Human Suplex Machine” goes through his preparations.

“You don’t actually realize it until you see the thought process that Taz goes through and how he thinks about things – it really blows you away how he can come up with anything at the drop of a dime,” Starks said. “Being associated with him, I have learned a lot – from a business aspect, from a talking aspect and a wrestling aspect.”

With Taz as his sounding board, Starks says he’s helped to refine his character and mic work.

“Taz is really good at making sure you nail home exactly what you’re trying to get across,” Starks said. “He and I will sit in the trailer and pitch back and forth different ideas and different sayings and see what sticks. It’s really cool to see that, especially with a person like Taz because you would think on the surface that he and I wouldn’t get along, but we have a lot more in common than most people would think.”

Team Taz has found itself embroiled in two lengthy feuds in recent months – one with current TNT champion Darby Allin and one with the AEW Rankings, with Starks and Cage constantly feeling overlooked and underrated by them. While his on-screen character is roiled by the company’s ranking system, Starks thinks it’s a novel idea for a wrestling company with potential title matches coming from a champion defending against one of the competitors ranked from No. 1 to No. 5.

“I think it’s good to have because not only does it give wrestlers incentive, but it gives the fans something visual to say, ‘Alright, here’s what we have as far as a potential matchup for a championship match,’” Starks said. “It could be out of these five guys, but you don’t know who. And I like that about it because there’s still a spontaneity to it when it comes to match-making... So if we have that logic already laid out for fans, to me it’s a lot easier to follow along and explain to people who might be casual viewers, which is the goal – to get more casual viewers and lock them in.”

As for potential matchups, Starks says there are a number of opponents within the company with whom he’d like to step into the ring.

“Dream matches for me would definitely be Adam Page,” Starks said. “It would be Jungle Boy. Who else? I’d say the obvious in Sammy [Guevara] and Max[well Jacob Friedman], MJF. Those are the main people off the top of my head who I’d love to get in there with. Then, of course, as you move on, the [Kenny] Omegas and PACs and guys like that, as well.”

If 2020 has been a blur for Starks, he knows what he hopes the next year will look like as the calendar readies to turn over to 2021.

“Success for me in a year from now would be I’ve made enough money to buy my mom a home,” Starks said. “I can take care of my brother, my sister and my niece. That’s really success for me. If we’re talking about what success would be in wrestling, in AEW, it would obviously be to become the next TNT champion – or screw that and let’s skip it and go straight to the AEW World Championship, baby! But that’s what success would look like a year from now. I think I’ve already cemented my place as one of the pillars here in AEW that the company will be built upon.”