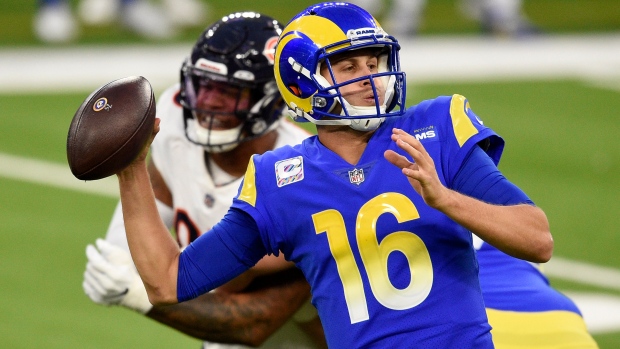 With five weeks left to go in the NFL regular season, the focus has shifted to the push for the playoffs with 14 spots up for grabs thanks to the added Wild Card in both conferences.

There has been no shortage of talk about the fact that the NFC East division winner will likely earn a playoff berth with a sub-.500 record.

At the same time, all four teams from the NFC West are still in contention with the Seattle Seahawks, Los Angeles Rams, Arizona Cardinals and San Francisco 49ers either in or within a game of a postseason position.

That will make those divisional games that much more important for the NFC West contenders, including a clash between a pair of teams currently in Wild Card positions this Sunday.

Here are our best bets for Week 13 in the NFL.

The Rams have played the Cardinals six times since Sean McVay was hired as their head coach in 2017.

Los Angeles is 6-0 straight up and 5-0-1 against the spread over the past six meetings between these teams.

I expect the Rams to add to that win total on Sunday thanks in large part to the fact that Cardinals quarterback Kyler Murray isn’t right.

Arizona is 5-2 this season when Murray finishes with 61 rushing yards or more.

However, they are 1-3 when he finishes with less than 60 rushing yards, which includes back-to-back losses to the Seattle Seahawks and New England Patriots over the past two weeks.

Murray, who is dealing with a shoulder injury, ran for a combined 46 yards on 10 attempts in those losses to Seattle and New England.

Now he has to deal with Brandon Staley’s defence, which has allowed the fourth-fewest rushing yards in the NFL this season.

Arizona has failed to cover in four straight heading into this week, and would be 0-4 outright over that span if it wasn’t for the ‘Hail Murray’ in a last second win over the Buffalo Bills in Week 10.

I’ll take McVay and the Rams to get back on track against the Cardinals this week.

Look, I get it, you never want to be that person rooting for the under.

But it’s 2020, so chances are you’re watching this game alone, and this can be our little secret.

In this matchup we get two teams that both like to run the ball, and I think that will play a big part in this going below the total.

It should come as no surprise that the Titans lead the league in rushing attempts, while the backfield of Nick Chubb and Kareem Hunt has carried the Browns to the fourth most attempts this season.

Add that to the fact that I don’t trust Baker Mayfield to move the ball down field and convert in the red zone, and I think we can see this game fall below the number.

Now, let’s be real for a second.

This game will have points, both teams are going to move the ball up and down the field, and both offences rank in the Top 7 for red zone efficiency.

We could see seven touchdowns and a field goal on Sunday and still only have 52 points in a 28-24 game.

I think this might be the game that moves faster than everyone else because of all the rushing opportunities.

Plug your nose, enjoy some gritty football, and take the under.

Pick: Browns at Titans Under 53

The Browns do two things well: They run the ball and they rush the passer.

Meanwhile, the Titans struggle badly against the run and are severely banged up on the offensive line.

Tennessee has surrendered 14 all-purpose touchdowns this season to running backs, and you can make a case that Nick Chubb is the best pure runner in the league.

The former Georgia star is averaging 6.25 yards per carry this season, which is only .13 yards off the modern day NFL record set by Jamaal Charles in 2010.

He’s averaging 138.7 rushing yards per game since returning from injury, and his presence on the field has been a key to Cleveland’s success this season.

The Browns are 6-1 with Chubb in the lineup, and just 2-2 without him.

They average 103.5 more rushing yards in games that he plays, and have a point differential that is 34 points higher.

Also working in Cleveland’s favor is the return of stud edge rusher Myles Garrett, who missed last Sunday’s game due to COVID.

Garrett is Pro Football Focus’ fourth highest graded rusher, a top-three defensive player of the year candidate, and absolute menace to deal with.

His return spells trouble for a Tennessee offensive line that is missing two starters and ranks 25th in pass rush win rate.

Sure, the Browns will have their hands full with Derrick Henry, but six points is too much to lay for a Tennessee team that lost outright to Cincinnati, and barely beat sub .500 opponents like Denver, Jacksonville, Minnesota, Houston and Chicago.