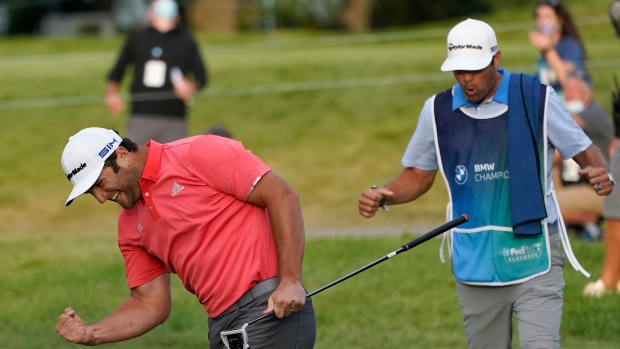 Though this is the fourth year of this tournament’s existence, the COVID-19 pandemic has resulted in a change of venue for the CJ Cup: from Nine Bridges in Jeju Island, South Korea, to Shadow Creek in Las Vegas.

It has also knocked out the pre-tournament favourite, with Dustin Johnson withdrawing on Tuesday due to a positive coronavirus (COVID-19) test result.

The three previous years, this event was hosted as part of the Asian swing in South Korea for the CJ Cup at Nine Bridges Golf Club.

With the PGA Tour opting not to play overseas, the location is now in Las Vegas at a golf course that hosted the first ‘Match’ between Tiger Woods and Phil Mickelson two years ago.

The field that is assembled for this tournament is fantastic as four of the top-six players in the world are competing, with Bryson DeChambeau and Dustin Johnson being the exceptions.

Brooks Koepka returns to action after being off the last couple of months as he rested injuries.

Last week in the first of back-to-back tour stops in the Sin City, +25000 long shot Martin Laird outdueled Matthew Wolff and Austin Cook in a playoff for his fourth PGA Tour victory.

As Shadow Creek has never hosted an official tour event, most players won’t be as familiar with this track as they would for usual stops.

Though it wasn’t at this venue, Justin Thomas has won this event in two of the first three years of its existence - in 2017 and again last year.

Four Canadians will tee it up, with each considered a long shot to earn a victory.

Mackenzie Hughes has the shortest odds at +9000 to win his second tour title.

Here is our first look at the field for the CJ Cup At Shadow Creek.

After an uncharacteristic stretch of three starts where he wasn’t any better than T-25th, Justin Thomas seems to have found that extra gear in his golf game.

The 2017 and 2019 champion of this tournament was tied for second at the Tour Championship to end the campaign.

He followed that up by grabbing the first-round lead at the U.S. Open.

While he wasn’t able to get it over the finish line, he did post a respectable T-8th finish.

The tour’s best player in strokes gained tee-to-green has continued that strong trend, gaining at least four shots on the field in 10 of his last 12 tournaments in that category.

With most of the big guns competing, he’s the second favourite on the board to win outright, so you’re getting slightly better value with him than Jon Rahm.

Past Three Winners of the CJ Cup

*All three wins were on a different golf course

The 2018 champion of this event is back on the tour after being off for two months while he’s been attempting to ail knee and hip injuries.

Brooks Koepka needed to shut it down to get himself better, after posting just two top-10’s in his previous 15 times teeing it up.

Excited to get back out there at next week’s CJ Cup at Shadow Creek.

It’s been a challenging but productive two months of rehabbing my injury.

Looking forward to starting the new season in Vegas! As a past champion, I commend everyone at the CJ Cup for moving forward! pic.twitter.com/sbuKrDZ6b4

Ordinarily, you could expect that he might be able to win after the lengthy layoff if it was at a track that he was familiar with.

However, Koepka’s win at this tournament came in Asia, so he can’t get by on his past laurels.

At +2800 odds, it's mildly tempting to consider placing a wager.

However, that is still too low to expect him to compete against such a top-heavy field and come out ahead of everyone else.

This is Brooks Koepka we’re talking about, so if there were anybody who could do it, it would be him.

At some point, Abraham Ancer has to break through and earn his first PGA Tour victory.

The 29-year-old is coming off a fourth-place result at last week’s Shriners Hospitals for Children Open.

Ancer has also been a runner-up twice on the campaign, nearly closing out the American Express and RBC Heritage.

Dating back to last year, he’s made 21 of his last 22 cuts worldwide.

That strong run started at this very event last year.

He's gained strokes on the field off the tee in 13 of his last 15 tournaments.

It really feels he’s on the precipice of breaking through on the biggest stage and that could happen this week at a venue that not many players have seen.

Another golfer who was in the mix in Las Vegas last weekend was two-time tour winner Brian Harman.

Though he tailed off a little down the stretch with a Sunday back nine of 2-over 38, Harman still wound up with a top-15 finish.

That’s his eighth straight tournament that he’s been around for the weekend, and his third top-15 result.

Of all his competitors he’s facing against this stacked field, Harman ranks second in strokes gained around the green in the last 50 rounds on tour.

There will always be players with bigger stature and backing, and therefore Harman’s odds have dipped to a very reasonable +7000 to win outright.