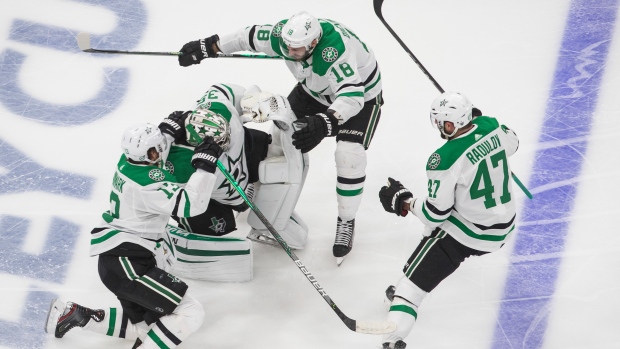 The Dallas Stars are headed to the Stanley Cup Final for the fifth time in franchise history.

It’s a remarkable turnaround for a team that had only one win through its first nine games of the season.

The Stars were +1500 to win the Stanley Cup when they first arrived at the NHL bubble. After advancing to the final with a 3-2 overtime win over the Vegas Golden Knights on Monday night, Dallas is now listed at +150 to win it all.

Stars of the bubble

The Stars trailed 3-1 in the third period, but rallied with goals from Jamie Benn and Joel Kiviranta to tie it, before Gurianov ended it on the power play just 3:36 into the extra frame.

Dallas was a betting underdog in each of its past eight wins, including Monday’s overtime victory.

TSN’s Director of Scouting Craig Button joined Jay and Dan to discuss how the Stars were able to beat the Golden Knights.

TSN's Director of Scouting @CraigJButton joins #JayAndDan in the Coors Side Seats to discuss how the Stars were able to beat the Golden Knights. pic.twitter.com/T158X2hcZ4

After getting past the Calgary Flames as a small favourite in the first round (-125), Dallas was +205 to win its Western Conference semifinal series against the Colorado Avalanche. The Stars won in seven.

Next up, Dallas was +200 to beat the Golden Knights in the Western Conference final. The Stars won in five.

The hockey world reacts to the @DallasStars booking a ticket to the Stanley Cup Final!

From a betting perspective, their last two playoff round wins looked very different.

In their series win over the Avalanche, Dallas and Colorado combined for 57 goals – the over hit in six of the seven games.

In their series win over Vegas, the Stars and Avalanche combined for just 17 goals – the under hit in all five games.

On the other side of the bracket, the Tampa Bay Lightning will have a chance to book their spot in the final when they take a 3-1 series lead into Game 5 against the New York Islanders on Tuesday night.

If the Lightning advance, Dallas will once again be an underdog in the final.

Here is what the updated Stanley Cup odds looked like after the Stars advanced on Monday night, according to Bet MGM:

Week 1 in the books

A wild Week 1 of the NFL season came to an end with an entertaining Monday Night Football doubleheader.

First up, Pittsburgh Steelers quarterback Ben Roethlisberger threw for 229 yards and three touchdowns in a 26-16 win over the New York Giants – his first start since Week 2 of 2019.

After that, Ryan Tannehill and the Tennessee Titans survived three missed field goals and a missed extra point from kicker Stephen Gostkowski to beat the Denver Broncos 16-14.

While the Titans won, they failed to cover as three-point road favourites.

It was a bad beat for The TSN Edge staff picks, which went 5-1 on the Monday Night Football doubleheader.

Big Ben is back

After watching Tom Brady and Phillip Rivers struggle on Sunday, there were legitimate question marks about what to expect from the 38-year-old Roethlisberger in his first NFL action in almost a year.

Roethlisberger put to rest any doubts about his health as he threw for 229 yards and three touchdowns in a Steelers’ win.

Roethlisberger’s performance earned him QB9 status in standard TSN fantasy football leagues for Week 1, which is that much more impressive when you consider everything he went through just to get back on the football field this season.

A rejuvenated JuJu Smith-Schuster went for six receptions, 69 yards and a pair of touchdowns – good enough to earn WR7 honours for the week.

Meanwhile, B.C.’s Chase Claypool made his first NFL catch a memorable one.

The biggest surprise was the fact that Benny Snell Jr. led all running backs in the game with 113 rushing yards. Snell stepped up in place of an injured James Conner, who left the game with an ankle injury.

Meanwhile, Giants running back Saquon Barkley was held to just six rushing yards on 15 carries. Fortunately for his fantasy managers, Barkley finished with six catches for 60 yards to salvage a mediocre stat line for Week 1.

Jamal Murray and the Denver Nuggets will try to upset the Los Angeles Clippers and become the first team in NBA history to come back from down 3-1 in multiple series in the same postseason.

So far in these playoffs, the Nuggets are 5-0 in elimination games.

On the flip side, Kawhi Leonard and the Clippers get their third and final opportunity to eliminate Denver and advance to the conference finals for the first time in franchise history.

Los Angeles is 0-7 all-time in games in which they’ve had a chance to clinch a conference finals berth.

Still, the Nuggets aren’t getting much respect from Vegas. The Clippers are a 7.5-point favourite for Game 7.

Meanwhile, before the main event it will be Game 1 of the Eastern Conference final between the Boston Celtics and Miami Heat.

The Celtics are the betting favourite to win that series at -140 odds.

Miami is +115 to upset Boston and reach the finals.