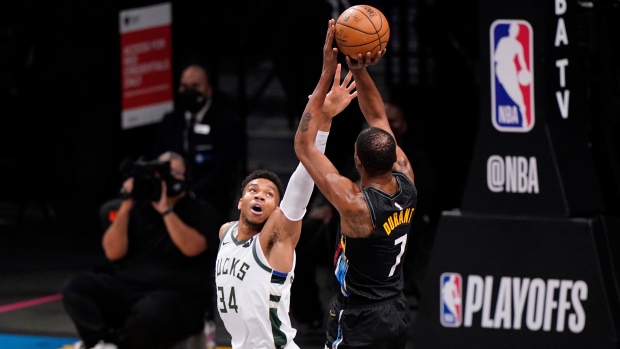 Ever since James Harden was traded from Houston to form the Brooklyn ‘Big 3’, oddsmakers have continuously favoured the Nets to hoist the Larry O’Brien Trophy.

Even with Kevin Durant, Kyrie Irving and Harden missing a combined 83 regular-season games in 2020-21, there was never a blip in their projections; with each passing week their championship trendline lowered to even money.

You’d think the injury to Harden in Game 1 of the Eastern Conference semifinals would impact the Nets’ championship outlook. Maybe the Game 3 loss in Milwaukee would pull it back up? Vegas didn’t flinch.

Brooklyn is currently at +120 and technically speaking the odds suggest the field is slightly favoured to win the championship. But the question becomes, which low probability scenario is the one that plays out?

·       Milwaukee makes a miraculous comeback as Harden stays sidelined?
·       One of the Western Conference teams proves the doubters wrong?

As it stands, here are the updated futures for the remaining eight teams:

Here are my two scenarios most likely to stop the Nets.

The knock on Utah’s championship aspirations (and Phoenix’s as well) has always been the top-10 player argument. Can a team win a championship without having the best player on the court?

Kawhi Leonard is undeniably still a top-10 player, a debate could be had between Devin Booker and Donovan Mitchell, and then you still have Durant waiting in the finals.

Ahead of the second-round, the Jazz (+325) were the Western Conference betting favourites to win the championship but, similar to Brooklyn, they lost a key cog in Mike Conley.

Though L.A. had a chance to kick them while they were down, the Jazz resiliently took both games in front of a rambunctious home crowd led by emerging superstar ‘Spida’ Mitchell. The absence of Conley created the perfect opportunity for him to shine, and he did not disappoint.

Just like the Nets, the Clippers have similar interior defence deficiencies but they’ve managed to limit opponents to six fewer points per game in the paint. Unfortunately for them, Mitchell’s playmaking has been unstoppable.

Outside of Trae Young, no other player has averaged more than 11 points off drives in the second round. Mitchell is at 17.5 per game and shooting 60.9 per cent in those scenarios.

The 24-year-old won’t get credited for being a better player than any of Brooklyn’s Big 3 but his evolution could be an example of the new era breaking through in the NBA.

The final kicker to Utah’s claim? After registering the third-best defensive rating during the regular season, they’ve regressed during the playoffs to third-worst of the remaining eight teams. Looking at their personnel, don’t be surprised if things improve quickly on that side of the court.

Milwaukee sneaks in a win before Harden’s return

Sure the Bucks are down just 2-1, but by no means was their win on Thursday convincing. After going up 21 points in the first quarter, they quickly donated the game back to Brooklyn allowing it to become a one possession game by half time. Ugly or not, Milwaukee secured the win and now has a plausible chance at stealing this series.

Khris Middleton woke up from his slumber and Giannis Antetokounmpo attempted 31 shots leading to a combined 68 points from the duo (79 per cent of Milwaukee’s total points).

Durant and Irving missed their fair share of makeable shots but the opportunities for improvement are much more obvious on the Bucks’ side.

Brooklyn has been very deliberate about giving Antetokounmpo the three. Blake Griffin is possibly playing the best defence of his career and has been successful clogging the paint. The ‘Greek Freak’ can’t fall victim to their mind games.

Of his eight three-point attempts, seven were wide open with the defender more than four feet away. He was 1-for-8 on Thursday and 4-for-32 through seven playoff games. As much as the analytics community hates mid-range shots, Antetokounmpo has been 7-for-20 from that distance.

The good news for his teammates, they’ve graded well on shot selection from beyond the arc. During the playoffs, they’re averaging 35.7 three-pointers per game and 87 per cent of those attempts have been with the closest defender more than four feet away. Unfortunately they rank as the worst three-point shooting team of the remaining eight (22.7 per cent during round 2).

Considering the quality of their looks, the regression police are knocking. Milwaukee was fifth during the regular season at 38.9 per cent from three. Arbitrarily, if the Bucks can meet halfway and up their three-point percentage to 31 per cent (still the worst of the eight), that’s nine more points per game.

But who knows, maybe Milwaukee truly is just a regular season team.