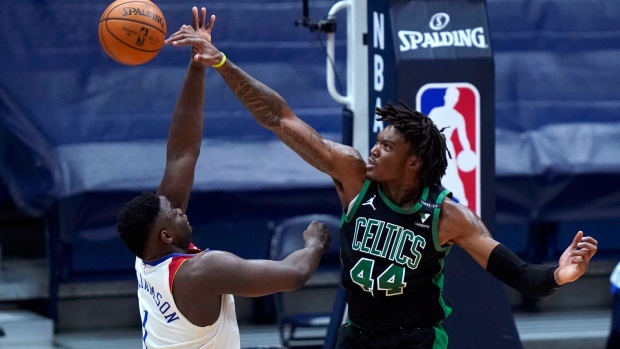 With a six-day layoff coming for All-Star Weekend, now’s the perfect time to take a gamble or two on high-upside players who could shoot up in value over the second half.

Catalysts like injuries or trades typically cause the biggest disruption to fantasy player rankings. During these events, winning managers capitalize on the fallout and scoop up free agent adds or make solid trades.

A gap in the schedule like ASW can cause a similar ripple effect.

Several injured players will get an additional week of recovery time. Many teams will take a long look at the standings and start prioritizing player development over winning. A handful of veterans will be asked to take a buyout or be forced to accept reduced playing time.

With all these scenarios in mind, here are five names to watch during the second half:

‘Time Lord’ could be in for increased play time judging by the sense of disappointment throughout the organization. General manager Danny Ainge has been quoted saying, “our roster obviously is not good.” Head coach Brad Stevens has been under heavy criticism by the media for the team’s 18-17 first-half record. Perhaps Williams can give this team the shot in the arm they need; he’s been a per-36 gem this season. Over the past month, he’s 10th in per-36 value with an extrapolated slash line of 16.3 PPG, 12.3 RPG, 2.1 SPG, 3.0 BPG. He’s had his most productive stretch over the past two weeks, putting up top-65 value and with Tristan Thompson declining, I’d bet Williams sees an uptick in minutes.

Having played just eight games in 2020-21, White has flown under the radar as a viable fantasy asset. He started the year on the IL recovering for left toe surgery, and immediately stubbed it in his first game back. He went on to miss almost all of January but played seven games in February before ending up on the COVID list more than two weeks ago. With six more days to recover, White can hopefully return to the lineup post-ASW and regain the form he displayed in the bubble. Through seven games during the summer, White was a top-40 player, logging 18.9 PPG, 3.1 3PT, 4.3 RPG, 5.0 APG in under 30 minutes of play. San Antonio didn’t make any significant upgrades at the guard positions this off-season, so outside of health, there’s no reason why White can’t return top-100 value in the second half.

With D.J. Augustin off to Milwaukee and Markelle Fultz out for the season, Anthony was thrust into the starting point guard role. Like most rookies, he was inefficient adjusting to the professional level, but was trending up before going down with a right shoulder strain. Over his past four games, he was shooting 48 per cent from the field and slashed a 15.0 PPG, 4.7 RPG, 5.5 APG stat line. If he’s healthy enough to return, the rookie should have all the minutes he can handle with Orlando second last in the East.

If you’re looking for a gamble, Claxton could provide sneaky upside in this high octane Brooklyn Nets offence. With so much attention on their Big 3, guys like Claxton, DeAndre Jordan and Joe Harris have been getting higher-quality looks than they would in an average NBA offence. Over five games this season, Claxton has produced top-85 value in just 15.1 MPG via defensive stats, low turnovers and field-goal percentage. Of 29 shot attempts this year, 26 have been at the rim, where he’s shooting 77 per cent. Visualize him as a poor-man’s version of Clint Capela on Houston. He’s an active offensive player, an athletic rim runner and has the chance for several easy put backs on the offensive glass.

Minutes are king in fantasy basketball; expect the 19th- overall pick to get his with Blake Griffin halfway out the door. Since being inserted into the starting five for Griffin, Bey has averaged 31.5 MPG and been a top-90 asset anchored by his shooting form beyond the arc (2.8 3PT). He should have enough runway to develop his game as the Detroit Pistons sit dead last in the East. The three-point shooting volume is already here, he just needs to improve his efficiency in the paint and display more defensive upside to be a legitimate top-100 player.