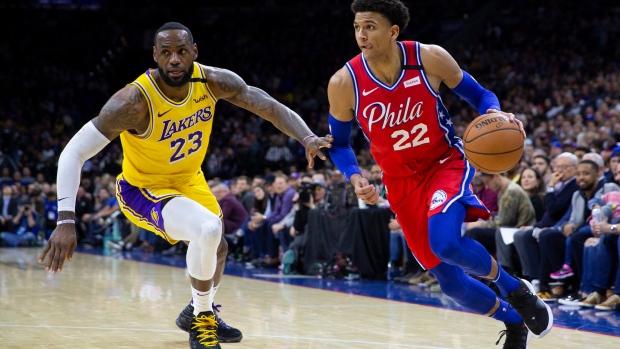 There’s just one week left for the majority of head-to-head fantasy leagues.

Now is the time to pull out all the tricks in your bag.

Here are four tactics to consider if you’re fighting for fantasy glory:

I rarely make recommendations for percentages due to its volatility. In a single-week matchup, even the most efficient team of shooters can find ways to drag you down.

Focusing on the six standard league counting stats, here is a tally of streamers rostered in less than 50 per cent of ESPN leagues who’ve cracked the top 50 over the last two weeks:

The defensive stats continue to be the most democratic of the bunch. Opportunistic managers should look at players like Matisse Thybulle or Kent Bazemore to solidify those two categories.

With zero streamers in the top 50 of points, any name you add off the wire is unlikely to swing the category for you. Chances are your fate is already pre-determined by your existing squad so unless you’re neck and neck, discount points when evaluating streamers for the week.

Injuries are inevitably a huge factor during the playoffs and many players who are mediocre in real-life are getting enough volume to impact fantasy.

Jeff Green is up to 33 MPG over the last two weeks with several Brooklyn Nets players in and out of the lineup. A top 80 option these past two weeks, he’s been a roto asset contributing to all nine cats.

Facundo Campazzo has benefitted from Jamal Murray and Monte Morris’ injuries, averaging 32.5 MPG in nine starts. Coincidentally, he’s been a top 80 player over this period, emerging as a top assists and steals specialist.

Drop all Hawks after Thursday

This advice applies specifically to head-to-head leagues with their finals happening this week.

Of the 30 NBA teams, Atlanta is the only team to be on break from Friday to Sunday.

If you play in re-draft leagues, you don’t get any bonus points for having brand name players like Trae Young or John Collins sitting on your bench.

Make sure to save a roster move or two for Thursday and drop all your Hawks for streamers that’ll play twice over the weekend; there are 21 teams to choose from.

Jaren Jackson Jr. managers can tell you firsthand, patience does not always pay off in fantasy basketball.

Several players have tentative injury statuses this week and with every team having a maximum of three games to go after Tuesday, a single DNP could be the difference between championship glory and a crummy second place ribbon.

I don’t have a crystal ball to predict exactly who will and will not play, but there are a few blue-chip guys that get me nervous.

When Fred VanVleet is on the floor, he gives you guaranteed production. But how much rest will he get this week? He missed two of the Toronto Raptors’ West Coast games thus far (one not even being a back-to-back) and with the play-in tournament getting out of range, do the Raptors gain more by giving Malachi Flynn and company more reps?

Including tonight’s match against the Los Angeles Clippers, Toronto has just three games remaining this week. One DNP equals a 33 per cent drop off in fantasy production.

Think long and hard about players like Malcolm Brogdon, Kristaps Porzingis, or Kemba Walker. Your fantasy fate could rest on your choice between action and inaction.