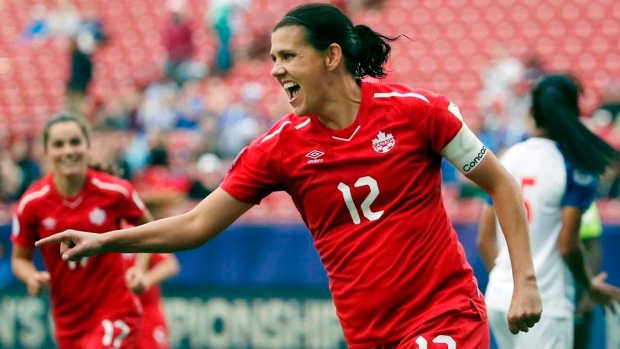 Canada coach Bev Priestman took the first step towards deciding her Olympic soccer roster on Monday, naming a 29-player squad for a camp ahead of next month's SheBelieves Cup.

The roster will be reduced to 23 for the four-team tournament scheduled for Feb. 18-24 in Orlando. But Priestman will have to further narrow down her squad to 18 for the Tokyo Olympics this summer.

Her message Monday was inclusive, with six uncapped players invited to camp — seemingly saying that while the Olympic roster is small and a core of veterans remains, show me what you've got.

The pre-tournament camp, which opens Feb. 6 in Orlando, marks Priestman's first hands-on time with the team since taking over in November after Kenneth Heiner-Moller stepped down to coach in his native Denmark.

The 34-year-old English native is jumping in at the deep end. Canada's opening match at the SheBelieves Cup is Feb. 18 against the top-ranked Americans.

Priestman suggested the camp and tournament will help answer questions around her squad.

"I think actually selecting the squad right now would be really difficult," Priestman told a media conference call. "I'm excited to see what the new faces bring. I've definitely picked up a certain tendency of hunger, desire, hard work from the group of new faces coming in.

"And I think for an sort of winning team, you have to have that level of competition for places."

Rose, who turns 18 on Feb. 12, has attended two senior camps but has yet to earn a cap.

"Any player that's getting exposure in this first camp has absolutely nothing to lose," said Priestman. "Do I expect those five, six players to be in an Olympic roster? Maybe not but who knows? They may absolutely prove me wrong. They can certainly be knocking on the door and they've got nothing to lose because they've been brought in for a reason.

"They've shown some attributes that I think this group needs. I've just said to them 'Bring what it is that you brought that's got you here.'"

Players who can line up in multiple positions will have an advantage, given the small size of the Olympic rosters, she suggested.

It's the first time Canada Soccer has summoned the 23-year-old Viens, a prolific goal-scorer at the University of South Florida who is currently on loan to Paris FC from Sky Blue FC of the NWSL.

"What I see in Evelyne — what all have seen — is she finds the back of the net, really well" said Priestman.

The 37-year-old Sinclair goes into the Florida tournament with a world-record 186 international goals to her credit.

In addition to the host Americans and the Canadian women, tied for eighth with Brazil in the FIFA rankings, the SheBelieves Cup also features Brazil and No. 10 Japan.

After playing the U.S., Canada takes on Japan on Feb. 21 and Brazil on Feb. 24. It's the kind of schedule and opposition the Canadians will face in Tokyo.

"It'll be the last tournament setting that we get before an Olympic Games," said Priestman. "Seeing players go back to back to back, all the processes that come around that, this (international) window was key for that."

"To test ourselves against some big hitters is where we need to be for an Olympic Games," she added.

Priestman's stated goal is to change the colour of medal from bronze, which Canada won at both the 2012 and 2016 Olympics. To do that, the Canadians will have to improve their record against Tier 1 opposition.

"There's some realities there. This American team doesn't lose very often as we've seen," said Priestman. "But I think on Canada's day we absolutely could and should be competing with the U.S."

The U.S. women are riding a 34-game unbeaten streak and have scored two or more goals in 30 of those games. The Americans are also unbeaten in their last 50 home matches (45-0-5) during which they have outscored their opponents 179-27 — including a 49-3 edge during their last 13 home matches.

Priestman has a good handle on Canada's young talent. From 2013 to 2018, she helped develop talent for the Canadian women's program and served as an assistant coach under John Herdman, whom she had also worked with in New Zealand.

She left in August 2018 to return home, serving as Phil Neville's No. 2 with the English women's team and English youth coach.

Eleven of the players on the Canadian camp roster are currently with teams in Europe with five playing in England, five in France and one in Sweden. There are 11 players from the NWSL, five from U.S. colleges and two from the developmental Super REX Ontario program.

The Canadian women have not played since March 10, when they wrapped up play at a tournament in France with a 2-2 tie with Brazil. A Canadian camp scheduled for England in October was called off on the advice of medical experts due to the pandemic.

All four teams at the SheBelieves Cup have qualified for the Tokyo Games, with Canada finishing runner-up to the Americans at the CONCACAF Women's Olympic Qualifying Championship last February.

And all four made the knockout phase of the 2019 World Cup in France. The U.S. won the tournament while Canada, Brazil and Japan were eliminated in the round of 16.

Priestman has experience at the SheBelieves Cup, having gone there the last two years with England.

The defending champion Americans have won the SheBelieves Cup three times. France won in 2017 and England in 2019.

NOTES: Priestman says Jasmine Mander, who has coached at the Whitecaps academy, has joined the national team as a performance analyst … Goalkeeper Sabrina D’Angelo, who plays for Vittsjo GIK in Sweden, is recovering from knee surgery.

This report by The Canadian Press was first published Jan. 25, 2021