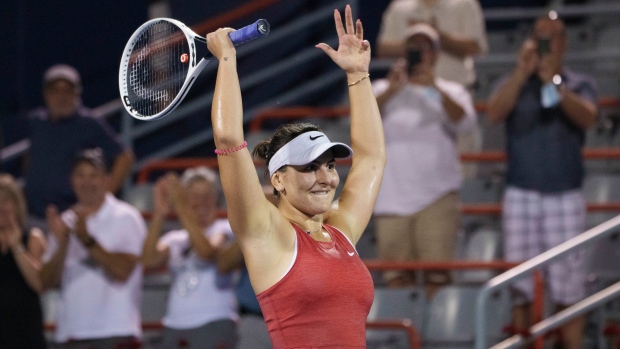 Defending women’s champion Bianca Andreescu is heading to the third round at the National Bank Open after defeating qualifier Harriet Dart of Britain in three sets on Tuesday.

The Mississauga, Ont., native came out strong and broke Dart three times in the opener.

Andreescu held serve with two aces to begin the set before putting a shot down the line to break her opponent for a quick 2-0 advantage. Dart broke right back when the Canadian made two unforced errors on returns, but the 172nd-ranked Dart couldn’t hold either of her next two serves as Andreescu cruised the rest of the way in 36 minutes.

The 21-year-old Andreescu, playing her first match since a first-round exit at Wimbledon in late June, appeared to show some rust in the second set with unforced errors that gave 25-year-old Dart a much-needed break point to go ahead 3-1. The Brit minimized her mistakes throughout the set and eventually took it to force a decider.

Dart went up 2-1 in the third after breaking Andreescu, who broke right back and let out a roar of emotion while doing so before taking her first lead of the set 3-2. Another timely break for Andreescu made it 5-3 and brought cheers from the hometown crowd as she served for the win.

Prior to the tournament Andreescu said her confidence had been “up and down” in recent months as she dealt with injuries and a positive COVID-19 test, while also parting ways with her longtime coach Sylvain Bruneau.

Andreescu, currently ranked eighth in the world, had played just 19 matches this season before the National Bank Open, going 12-7 including that first-round upset defeat against Alize Cornet at the All England Club.

Andreescu beat Serena Williams in the 2019 final to win on home soil, one of her three victories that year including the U.S. Open.

The tournament, formerly known as the Rogers Cup, was not held in 2020 due to the COVID-19 pandemic.

Tennis Canada is allowing 5,000 fans this year for each of the day and night sessions at centre court in Montreal, and 4,500 per men’s session in Toronto.

Meanwhile, Canada’s Carol Zhao was ousted by Sara Sorribes Tormo in a first-round match Tuesday, with the Spaniard taking it 6-2, 6-3.

Earlier, Russia’s Daniil Medvedev advanced into the third round of the men’s singles draw in Toronto, defeating Alexander Bublik of Kazakhstan 4-6, 6-3, 6-4 in a match that was briefly suspended by rain.

Medvedev, the No. 2 player on the ATP Tour and the top-ranked entry at the event, made the finals at the last edition of the tournament in 2019, losing to Rafael Nadal.

There won’t be a rematch of that bout in 2021 after Nadal withdrew from the tournament Tuesday, citing a foot injury.

“At the end of the day, for me, the most important thing is (to) enjoy playing tennis. Today, with this pain, I am not able to enjoy it,” said Nadal, a five-time champion in Canada.

Nadal was replaced in the draw by fellow Spaniard Feliciano Lopez, who lost in qualifying.

In other action at the Aviva Centre, American John Isner won his opening-round match 6-4, 6-1 over Alejandro Davidovich Fokina of Spain.

Isner, ranked No. 30 on the ATP men’s tour, made quick work of the 35th-ranked Davidovich Fokina, winning the centre-court match in just over an hour.