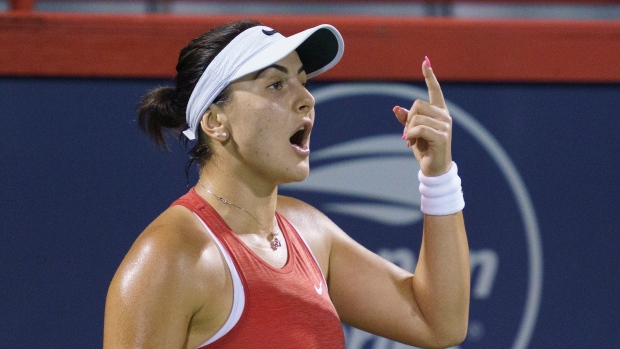 Canada's Bianca Andreescu had a few words for the woman who ended her quest to defend her National Bank Open title on Thursday.

"I told her she better win now," Andreescu said with a smile, describing her net-side conversation with Ons Jabeur of Tunisia.

The duo battled through two hotly contested sets Friday before Jabeur pulled away in the third for a 6-7 (5), 6-4, 6-1 third-round victory.

It was a marathon match that stretched out over nearly four hours, with two rain delays, two medical time outs and two hours, 39 minutes spent on the court.

Andreescu, the No. 2 seed, saved 5-of-11 break points across the match and Jabeur hit nine aces to secure her spot in the quarterfinals.

"I'm super disappointed in how I played," said Andreescu, a 21-year-old native of Mississauga, Ont. "But at the same time, Ons played super well. And I tried to play my best with what I had today."

Still, her frustration with the loss was palpable.

"I know I could have won this tournament again. (Expletive) happens," said the world No. 8. "I know that I'm going to bounce back."

Jabeur was broken early in the first set but jumped out to a 5-3 lead, and Andreescu was forced to work her way back with a combination of powerful serves and smartly placed returns.

The tiebreak saw Jabeur send three balls into the net and attempt another return as she slid to the ground, sending a shot high and wide.

Andreescu appeared to win the set with a shot down the line before the chair umpire called for a review. The video replay showed the shot falling just wide.

A long return from Jabeur sealed the hour-long set. Each woman won two breaks and had an ace across the frame.

Andreescu took a brief medical timeout during the set break to get treatment on her foot.

Then, heavy rain soaked the court midway through the second set, forcing an extended delay with Jabeur up 3-2 but Andreescu ahead 40-0 in the sixth game.

Jabeur, the world No. 22, used the break to look at stats with her team and find ways to improve her game.

"I wanted to see what I was doing wrong because I knew it was very close," she said, adding that focusing on her first serve made a big difference.

After the nearly hour-long break in play, Andreescu held her serve to pull even at 3-3.

It was a physical second set, with both players making mad dashes across the court to keep the ball in play.

A medical timeout forced another delay after Andreescu slipped and fell well below the baseline, apparently injuring her left foot. She stayed down on the court for several moments before getting up and limping to her chair where medical staff provided treatment.

"There's always something," said Andreescu, who has battled a variety of injuries since winning the tournament, formerly known as the Rogers Cup, back in 2019. "I don't know. I don't understand."

After having her big toe taped up, the Canadian returned to the baseline to serve and quickly knotted the set at 4-4.

Another sprinkling of rain provided yet another delay, with ball boys and girls using towels to dry the court's lines before play resumed and Jabeur took the second set.

The boisterous crowd of about 5,000 erupted in applause with every point Andreescu scored, but a smaller contingent — many draped in Tunisian flags — eagerly voiced their support for Jabeur, too.

There was a "crazy battle" both on the court and in the stands, Jabeur said with a smile. She noted that the DJ even scrounged up some Tunisian music that made he laugh during a break between games.

Jabeur will face Jessica Pegula in the quarterfinals on Friday. She won the battle of two American qualifiers against Danielle Collins, 6-4. 3-6, 7-5, in a match that didn't start until after 11 p.m. local time.

Earlier on Thursday, Canadian Rebecca Marino saw her remarkable run at the tournament come to an end with a third-round 6-1, 6-3 loss to No. 1 seed Aryna Sabalenka of Belarus.

The 30-year-old wild-card entry from Vancouver made it through to the round of 16 with upset wins over No. 16 seed Madison Keys and Spain's Paula Badosa, the world No. 31.

“It didn’t matter who I was going to play. I just wanted to leave it all on the court and give it my best shot," Marino, ranked 220th in the world, told reporters after the loss. "In my heart, I feel like I belong with these players, I belong at this level. And I feel the results demonstrated that. … I’m glad I got to show everyone how I play.”

High-level tennis isn't new to the Canadian. She had a career-high No. 38 WTA ranking back in 2011, but stepped away from the sport for nearly five years to deal with depression.

She fell behind early in Thursday's match with Sabalenka saving four break points to cruise to a 5-0 lead in the first set.

Sabalenka, the world No. 3, knew coming in that Marino serves well and tries to force her opponents wide. She also knew there was little on the line for the underdog.

"I was trying to not give her any opportunities to come back in the match or even to put any pressure on me. I was kind of aggressive from the beginning to the end," Sabalenka said.

"It’s dangerous to play against players who have nothing to lose.”

Marino came out strong in the second set with a pair of aces and held her serve through the first six games. But she struggled with break points, going 0-for-5 across the 59-minute match.

“I’m a little disappointed with today, but overall, if I look at the grand scheme of the week, I think there’s a lot of positives I can take from this experience and I’m really proud of myself," she said.

Sabalenka will face No. 8 seed Aryna Azarenka, also of Belarus, in the quarterfinals on Friday.

The next round will also see Spain's Sara Sorribes Tormo take on No. 4 seed Karolina Pliskova of the Czech Republic, and Italy's Camila Giorgi battle No. 15-seed American Cori Gauff.

At the men's tournament in Toronto, Stefanos Tsitsipas had a memorable 23rd birthday on Thursday.

The No. 3 seed celebrated the milestone with a 6-2, 6-3 win over Russia's Karen Khachanov to advance to the quarterfinals.

The crowd wasn't about to let Tsitsipas' big day fade into the background after the win, serenading him with "Happy Birthday" as he was presented with a white sheet cake decked out with fresh fruit.

"The best feeling. One of the best feelings you can experience on a tennis court," Tsitsipas, the world No. 3, said after the match. "I'm glad they remembered."

The Greek tennis pro was dominant against Khachanov, saving both of his break points and winning 74 per cent of his total service points.

He'll face Casper Ruud of Norway in the quarterfinals on Friday. The pair met at the Madrid Open in May, with Ruud taking a straight-sets victory in the round of 16.

Top seed Daniil Medvedev of Russia cruised into the next round with a 6-2, 6-4 win over Australia's James Duckworth Thursday and will face the No. 7 seed Hubert Hurkacz of Poland in quarterfinal action.

American qualifier John Isner beat No. 4 seed Andrey Rublev of Russia on Thursday and will face France's Gael Monfils, the No. 11 seed, in the next round.

The quarterfinals will also pit No. 10 seed Roberto Bautista Agut of Spain against American Reilly Opelka.

This report by The Canadian Press was first published Aug. 12, 2021.