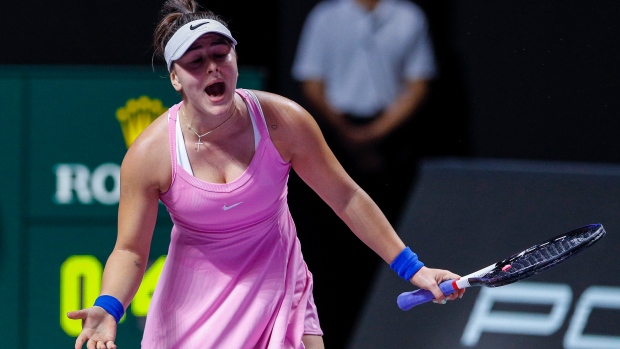 It was a meteoric rise for Canada’s Bianca Andreescu in 2019, winning the US Open, Indian Wells, Rogers Cup and climbing 147 spots in the WTA rankings.

But injuries have been a bit of a problem throughout Andreescu’s career, ending her 2019 season early and adding some adversity to a life-changing year.

Andreescu has not played since withdrawing in the group stage of the Shiseido WTA Finals Shenzhen with a left knee injury last fall, but she told TSN’s Mark Masters via videoconference that she’s learning to view her injuries as learning experiences rather than negatives.

"There’s good bad in every situation. But for me, having these injuries at such a young age in my view I think are beneficial because it really helps me understand my body more and what I want physically and mentally. Or knowing what my threshold is and all of that which will help me prevent more injuries in the future I would hope," Andreescu said.

"So I’m trying to take it as a positive as much as I can because I’ve learned so much about myself during those times so I’m definitely grateful. It’s a bittersweet period when that happens."

Meanwhile, no one quite knows when tennis will return, but if the French Open is played in September as currently planned, Andreescu says winning that is her goal for this season.

"Becoming No. 1 has always been up there. Maybe the French Open will be held in September, who knows, hopefully. From the beginning of the year I spoke to my coach and the goal was to win the French Open. And since the French Open could still be a possibility then that’s still my goal and if I do that, I don’t know how the ranking system is going to be, but if I do that I think I’ll have a good chance to become No. 1," she said.

When asked if there is anyone she wants to play and hasn’t had the chance, Andreescu didn’t hesitate, naming the top-ranked player on the WTA.

"Ashleigh Barty. I would definitely love to play her because she’s one of the women on tour that has a different game style than most. And I think it’ll be a nice challenge to play her."

"It would definitely be a fun match for the audience."

Andreescu currently sits at No. 6 in the WTA rankings, one spot ahead of Kiki Bertens and one behind Elina Svitolina at No. 4.