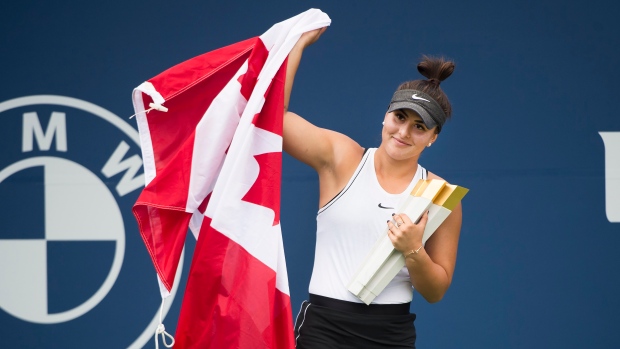 Bianca Andreescu was unanimously voted the recipient of the 2019 Lou Marsh Trophy on Monday, becoming the first-ever tennis player to be selected as Canada’s athlete of the year.

Andreescu became the first Canadian to win a Grand Slam singles title in August when she defeated Serena Williams in the U.S. Open Final. The 19-year-old won her first WTA title earlier in the year at the Indian Wells Open and captured a total of three titles on the year.

The Mississauga, Ont., native had a meteoric rise in 2019, climbing from No. 152 in the world to start the year to her current No. 5 ranking. She became the highest-ranked Canadian in WTA history in October when she reached No. 4.

"Canadian sports crushed it this year so there are definitely many other athletes who deserve a piece of this award as well — we all motivate each other to be better," said Andreescu. "I can't wait for what 2020 will bring and am always proud to represent Canada at the highest level."

Andreescu was forced to withdraw from the French Open in May due to a shoulder injury and remained sidelined for Wimbledon. She made her return to the court on home soil in August and won her second career title at the Rogers Cup when Williams was forced to retire with back spasms while down 3-1.  She was the first Canadian to win the event since Faye Urban in 1969.

At the U.S. Open, Andreescu became the first player to ever win the tournament her main draw debut when she held off a late surge from Williams for a 6-3, 7-5 victory.

Andreescu’s season came to an end last month at the WTA Finals, where she retired with a knee injury following losses to Simona Halep and Karolina Pliskova. She finished the year with a dominant 48-7 record, including a 17-match win streak that stretched from August to October.

The winner of the Toronto Star award is selected annually by a panel of sports journalists from across the country and has been awarded annually since 1936 with a three-year hiatus during the Second World War.