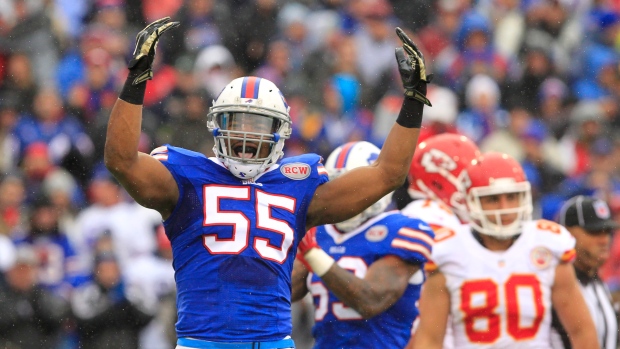 ORCHARD PARK, N.Y. - Defensive end Jerry Hughes had no intention of leaving the Bills just when things are beginning to look up in Buffalo.

The chance to play under new coach Rex Ryan, a defensive specialist, and alongside three Pro Bowl linemen were among the key reasons Hughes re-signed with the Bills on Monday. He signed a five-year contract with a potential worth of more than $45 million a day before having the opportunity to test his value on the NFL's free-agent market.

A person familiar with negotiations provided the player's contract details and spoke on the condition of anonymity because the team did not release those figures.

"We have a lot of unfinished business," Hughes said. "And I'm someone who doesn't like to leave anything undone. I wanted to come back with these guys so we could take care of that and get that accomplished."

He is referring to the unfinished business of helping the Bills make the playoffs, something that suddenly doesn't seem far-fetched after a 9-7 finish last season. It was Buffalo's best record in a decade, though the team still missed the playoffs to extend the NFL's longest active post-season drought to 15 years.

With Hughes under contract, the Bills talent-laden defensive front remains intact, rounded out by tackles Marcell Dareus, Kyle Williams and right end Mario Williams. The line has been the Bills' strength, and contributed to the team topping 50 sacks in each of the past two seasons — including a league-leading 54 last year.

Hughes spent the past two seasons playing on the left side, where he has blossomed into a pass-rushing threat since the Bills acquired him in a trade with Indianapolis. The 2010 first-round draft pick has 10 sacks in each of his past two seasons after combining for just five in his first three years in Indianapolis.

And now Hughes gets the chance to play under Ryan, the former New York Jets coach who took over after Doug Marrone opted out of his contract on Dec. 31.

"You know what he's bringing to the organization. You know he knows how to get to the playoffs," Hughes said. "So you want to be part of something special."

Hughes is expected to shift to an outside linebacker spot on a defence making the switch to a 3-4 alignment under Ryan.

The faith the Bills showed in Hughes by acquiring him was another reason he chose to stay.

"When someone goes about making a trade like that, I definitely want to give it back tenfold," Hughes said. "These two years were really something to me to be a part of the team and watch everyone grow. So you want to stick around and be a part of that."

"We thought we need to keep the core together as long as possible," general manager Doug Whaley said. "When you have a free agent come up that's been as productive as he has, and an integral part in our success as a defence, we just say, 'Hey, let's go all in with Jerry.'"

It still wasn't easy. Negotiations lasted more than two weeks before the framework of a deal was agreed to late Sunday.

With Hughes signed, the Bills have a large amount of payroll invested into a defensive line that already includes the six-year, $100 million contract Mario Williams signed in 2012. And the Bills need to free up room to re-sign Dareus, whose contract expires after this season.

Whaley isn't concerned by a potential imbalance, because the team doesn't have much salary committed at quarterback. EJ Manuel is still playing under his rookie deal, while the Bills acquired veteran journeyman Matt Cassel from Minnesota last week to compete for starting job.

"We're going to heavily invest in the defensive line," Whaley said. "That's one of the ways that we're going to have to play to win with the makeup of our squad: play good defence, run the ball, and have the quarterback protect the ball."

NOTES: Whaley declined to comment to The Associated Press on growing speculation the Bills might part ways with veteran running back Fred Jackson. On his way out of the media room, Whaley smiled without saying anything before a Bills employee closed the door and said, "Thank you." ... The Bills re-signed kickoff specialist Jordan Gay, an exclusive rights free agent, to a contract extension. Gay strictly handled kickoffs last year, and had 49 touchbacks on 80 attempts.