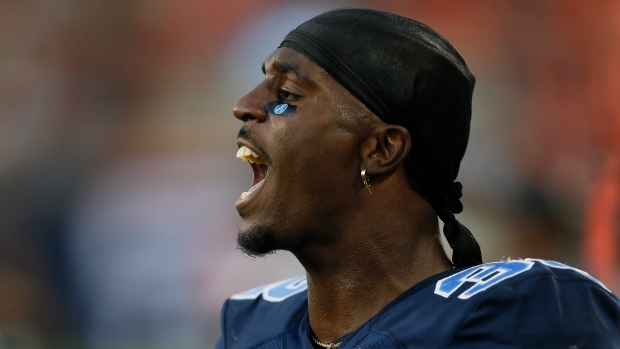 While covering the enshrinement of the 2013 Pro Football Hall of Fame class, I was part of a media audience with Cris Carter, the Minnesota Viking great and son of Ohio who was entering the hall in his home state.

My question for him that day was a simple one. I had zero anticipation of what he might say.

“What did you learn from playing in the National Football League?” I asked.

Carter did not answer right away. He took a long pause and looked more towards the ground than back at me.

“I learned,” he began, before pausing. “That the National Football League is one of the few places ...”

“Can make a whole bunch of mistakes ...”

“And still get a second chance.” 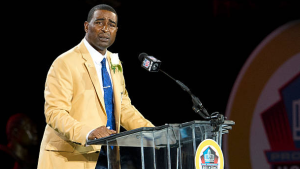 The exchange stood out because I hadn’t asked anything about race. No one had been steering the conversation in that direction during Carter’s media availability.

What it told me is that Carter, who had a series of problems with drugs and alcohol early in his career – mistakes that differentiate him from the acts of social conscience that got Colin Kaepernick exiled from the NFL – related his NFL experience to what he knew to be true in so much else of America. He understood he was provided a wider margin of error in professional football because of what he could deliver on the field.

He wasn’t so much making a statement about the NFL, but about life beyond the NFL. Carter was acknowledging that those second chances aren’t afforded to black men in many other professions or walks of life.

It also reminded me that most black athletes have an inherent awareness of race purely from the experiences they’ve had long before anyone knew their name.

I thought back on that conversation a lot this week.

When you cover professional football, you get to know a lot of young, black men. They come from different backgrounds and environments, with a tremendous amount of diversity. But one thing they all share is that, at some point, their lives have been affected by racism.

We don’t always ask them about it. Maybe we should. And if not now, when?

Talking about race can be uncomfortable, which is the point Corey Mace has been making this week as he’s offered to help guide people into the conversation.

The Calgary Stampeders defensive line coach and former NFL and CFL player made an offer via Twitter to try to help people understand what’s happening in the world right now.

“I’d love to offer an open conversation to anyone who may be confused about what is happening in Minn,” Mace wrote on Twitter. “No judgement, just healthy convo. I hope to educate you on how heartbreaking this is and ALWAYS has been. Love to hear your solutions. Please feel free to DM me.”

What did he find? 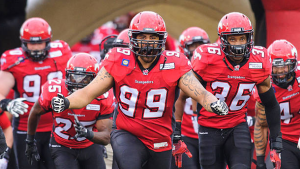 “The majority of it was people of both colours voicing their appreciation to have an open forum and they wanted to express to me that the black community has their support,” said Mace. “That was nice, but I wasn’t looking for that. I wanted to see what they’re seeing and what is the solution ... some hard conversations were had. There was no arguing. There was disagreeing, but it leaves both parties thinking about what can be done.

“I think it was healthy, but as far as solutions, it’s uncharted territory ... We might not agree on everything, but to understand was really the point of it for me.”​

Mace feels uniquely qualified to help anyone enter the conversation, no matter their race. He was born in Vancouver to a black American mother and a white Canadian father, spending part of his early years growing up in San Diego, as well as B.C.

He also went to school in the U.S. and played in the NFL with the Buffalo Bills before coming to Calgary.

He’s seen or thought about race from almost every perspective.

“I believe that being biracial and experiencing both sides of the border, I’ve seen the view of race from both sides with an open mind,” Mace said. “There’s a lot of it that is learned hate, but a lot of it is misunderstanding and misinformation because it’s a difficult conversation to have. But you’d be shocked to see how similar the conversations are, just the viewpoint is different. But it’s not that far off.

“I truly believe people love people. Everyone is aware there is an issue. It’s just time for everyone to come together to stand united and to find solutions to the problems.”

Mace believes that social media has helped give white people a better understanding of the discrimination many blacks experience and a platform that’s allowed them to speak out on the subject.

“To me, social media is a gift,” Mace said. “With George Floyd, if that video doesn’t surface, would it be the same?

“People feel more comfortable to say something. If you’re afraid and then you see people like Gregg Popovich or Carson Wentz or Steve Kerr speaking out, it energizes you. I feel we’re at a time where we’re real close to coming to the table to have the conversation ... that’s why I’m optimistic. There’s no hiding from it.”

James Wilder Jr. has not been hiding from it this week in Houston, where he’s been living while training for what he hopes will be the upcoming CFL season.

When Floyd was killed, the Montreal Alouettes running back decided to do something he’d never done before in his life – protest in the streets. He was out on the weekend and again during Tuesday's massive march in Houston.

Like Mace, he’s seen race from different perspectives, beginning life as the son of an NFL star, then living a modest existence in a different part of town with cousins after his parents separated when he was seven years old.

“I went from having a tree house and a pool in my backyard and my own bedroom and toy room to sleeping on a pallet with my cousins, where I got introduced to their way of living,” he said. “So I saw all sides of it.”

In high school, Wilder lived with a well-off white family for three years whom he considers part of his family to this day. Through that experience, he noticed that his white family hadn’t had to teach their children to be afraid of the police and what to do if they were ever pulled over. That was a standard part of upbringing in the black families he’d been around.

Wilder isn’t anti-police. His sister is a Tampa Bay police officer. But he is also aware that when he goes running in well-to-do neighbourhoods, he attracts their attention. 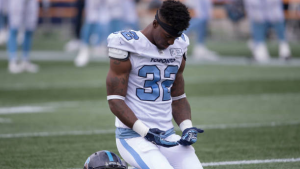 It saddens him that he must give the same warnings to his children about dealing with police that his parents gave to him.

“It’s different,” he said. “We are treated differently.”

One of the first conversations he had about going to protest was with his oldest child, seven-year-old daughter Nala.

“I had to explain to her what I was doing and why,” Wilder said. “She’s old enough to somewhat understand that sometimes people from different places are mean to each other because they don’t understand.

“I told her that there are people that are bullies from each race and Daddy is going to go and make people aware that we are all human and we all need to love each other.”

Wilder said there have been aspects of being part of the protests that have been fulfilling, such as witnessing the diversity within the crowds. On the weekend, Wilder marched for 12 hours, locking arms with a white man he did not know.

I quoted to Wilder the Martin Luther King Jr. line that “A riot is the language of the unheard.”

Wilder said his decision to protest was triggered by the killing of Floyd, but also fuelled by his disillusionment over the direction of political leadership in the U.S. when it comes to race.

“It starts from the top,” Wilder said. “When you have someone at the top promoting and enticing rage and violence, when our president is expressing this hatred, we feel pretty helpless. So we have to take it into our own hands. We are peacefully protesting, and we have the president calling us thugs and sons of bitches and the whole world is looking at us.

“I’ve had so many people reach out to me on Twitter and Instagram, and said we don’t know how to help. I want to protest but will I be safe? We have a lot of white people who want to come with us, but they are scared. We are all human, we are all equal and we need to all support each other and understand each other’s cultures.”

To understand part of why racism still exists in North American society, stop and consider how recently it was an accepted part of fundamental institutions.

Milt Stegall understands that because of his father, Garland, who was born in 1922 in rural Georgia, and didn’t have the right to vote until he was in his 40s.

“He hoped when he moved to Cincinnati he left that all behind,” said Stegall, who was raised in the Ohio city, just across the Kentucky border. “Unfortunately, he had to prepare me for some of the things I would experience in my life.”

Those things included hearing racial slurs hurled in his direction playing football as a kid. 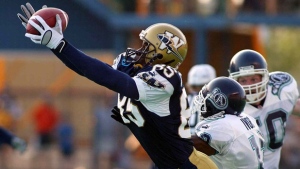 It may not have always been meant to be hurtful, but it always stung.

Stegall recalls a particular incident when he was a student at the University of Miami (Ohio), as a professor walked among the student desks handing back graded papers.

“In 99 per cent of my classes, I was the only black student,” he recalls. “I remember the professor giving me a B and saying, ‘Great job.’ She didn’t say anything to anyone else. It meant, ‘You’re not expected to do well, and if you do well, we’ll give you a pat on the back.’

It’s a moment that comes back to him whenever he sees blacks underestimated or misjudged because of the colour of their skin.

Later, during his rookie year with the Bengals, a black teammate invited Stegall to join him shopping for a new car. It wasn't long after the pair left the car lot that they attracted the attention of the police.

“When we were pulled over, the officer said, ‘How are you boys able to drive a car like this?’ ...He used those exact words ‘boys,’” Stegall said. “Then when he learned we played for the Bengals it was all fine. [The officer said] ‘Have a good season, hope you guys do well.’”

Stegall doesn’t pretend race doesn’t exist. He tells his children that it’s okay to see colour, to understand that blacks and whites have different experiences and may see things differently.

But he says those who are not affected by racism must take the time to understand and learn about the perspectives and experiences of those who are, or real social change will be difficult.

“I think the most important thing is it’s time for everyone to sit down and listen to what the people who are most impacted are saying,” Stegall said. “That’s what needs to happen. The people who are most affected are not going to be able to change this on their own. If they could, this would have been solved a long time ago.”