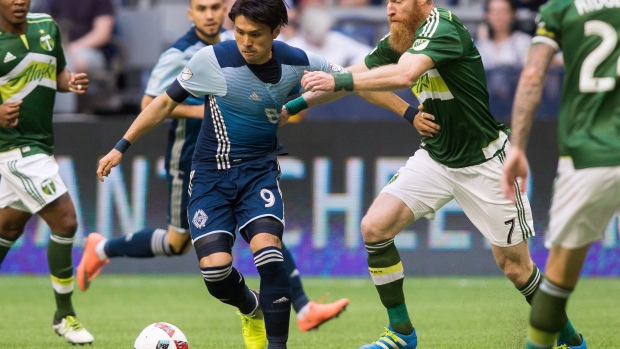 VANCOUVER - With his team down a goal despite a dominating opening 45 minutes, Vancouver Whitecaps head coach Carl Robinson's thoughts turned to his late father.

"It's a special day for me today, my father's birthday," said Robinson. "At halftime ... I'm talking to myself and one of the coaches said: 'Are you OK?' I said: 'Yeah. Bring me some luck, dad.'

"He brought me some luck with a mistake from the goalkeeper."

Christian Bolanos scored for the third time in as many games Saturday thanks to an error by Portland's Jake Gleeson in the Timbers' net as Vancouver stormed back from a 1-0 deficit to grab a much-needed 2-1 victory.

The winner in the 66th minute came on the midfielder's chip into the Portland penalty area that Gleeson allowed to trickle between his legs after Whitecaps striker Blas Perez flashed in front.

"Blas made a problem for the goalkeeper," said Bolanos. "He's thinking maybe Blas will touch the ball. It was lucky, but it's good."

Vancouver directed 26 shots towards Gleeson over the 90 minutes compared to Portland's nine in the Whitecaps' most complete performance of what has been a roller-coaster start to 2016.

"I'm a firm believer that if you put the work in you get the rewards. Not just in football, but in any walk of life," said Robinson, whose team picked up its first comeback win since Sept. 27, 2014. "The most successful people put in the hardest hours, the longest hours. Football teams are no different."

Masato Kudo, with his first in Major League Soccer, had the other goal for the Whitecaps (4-5-2), who won for just the second time in the last seven matches.

"We showed today what we can be," said Robinson. "Every man from one to 11 was very strong, but that's the standard I require."

Nate Borchers scored for the Timbers (3-4-3), who saw their three-game unbeaten streak snapped to remain winless on the road.

Kudo, who turned 26 on Friday, collected a deflected pass from Cristian Techera in the 60th minute and beat Gleeson at the near post on a low shot to tie the score.

"I sent (Kudo) a message last night," said Robinson. "He promised me he'd get a goal."

Portland, which eliminated the Whitecaps in last season's playoffs before going onto win the MLS Cup, grabbed the lead in the 36th minute when Vancouver's defence, which made a couple critical errors in last weekend's 3-2 away setback to New York City FC and has been an area of concern this season, switched off again at a critical moment.

Portland's Darlington Nagbe played a nice give and go with Fanendo Adi before feeding Borchers at the back post for his first of the campaign.

Despite having a couple of chances earlier in the half, the goal seemed to ignite the Whitecaps. Tim Parker flashed a header just wide off a corner in the 37th before Nicolas Mezquida fired a one-timed shot two minutes later that Gleeson did well to swat over the crossbar.

Techera then had another excellent opportunity in the 41st, but he couldn't find the target with his headed effort.

Bolanos, who was buzzing all afternoon, forced a good save out of Gleeson in the 49th minute, and then lashed another shot wide in the 55th before the Whitecaps clawed their way back into the game.

"The football took care of itself today," said Robinson. "I think we played some super stuff. We didn't score enough from our chances.

"Sometimes you've got to role your sleeves up, pull your socks up and get on with it and don't feel sorry for yourself. The boys didn't in the second half."

Notes: Portland striker Darren Mattocks, who was drafted second overall by the Whitecaps in the 2012 MLS SuperDraft and spent four years in Vancouver before getting traded to the Timbers prior to this season, started for the visitors and was booed every time he touched the ball. ... Vancouver forward Kekuta Manneh served a one-game suspension. ... The Whitecaps host the Chicago Fire on Wednesday before taking on Toronto FC at the newly renovated BMO Field next Saturday.