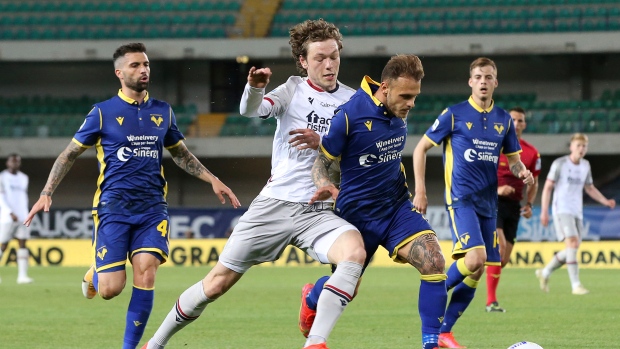 VERONA, Italy (AP) — Rodrigo Palacio equalized in the 82nd minute to give Bologna a 2-2 draw at Verona on Monday in a game between two midtable teams in Serie A.

Palacio met a cross at the far post with an outstretched leg to rescue a point with his fifth goal of the season.

Verona had taken the lead in just the second minute when the ball fell to Davide Faraoni in the box after a corner and he slotted home with his first touch. Lorenzo De Silvestri made it 1-1 in the 32nd by turning a low cross in from close range before Nikola Kalinic restored Verona's lead in the 53rd. Kalinic met a cross from the left with a deft volleyed flick from a tight angle at the near post for his 40th career Serie A goal.

Neither team had much to play for with Verona in 10th place, three points ahead of 11th-place Bologna ahead of this weekend's final round.