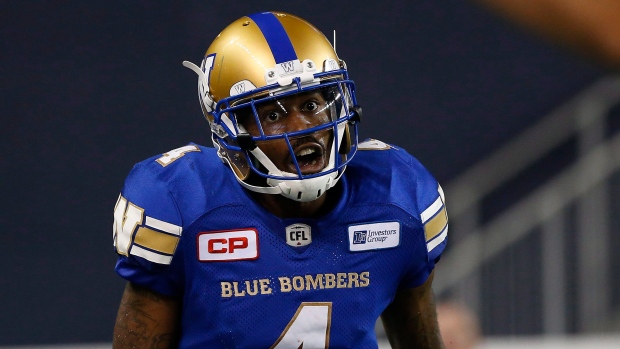 The six-foot-two, 200-pound receiver signed a contract extension through the 2019 season with the Winnipeg Blue Bombers on Monday. Adams was scheduled to become a free agent Feb. 14 and had an off-season workout with the NFL's Cincinnati Bengals.

"I just felt like it was a great decision to be back in Winnipeg," Adams said in a conference call. "Where I'm from loyalty is very important and family is a big thing.

"I feel like Winnipeg is a family and loyalty is shown there and I wanted to keep up my part of the deal."

Adams had 51 catches for 690 yards and six touchdowns last season despite playing in only eight games because of a broken collarbone. He had over 100 yards receiving in four of those contests.

"Darvin has continued to develop over the past two seasons, and in our view, is now one of the league's top-end targets," Winnipeg GM Kyle Walters said in a statement. "He was having a great season last year before unfortunately suffering a tough injury, but we look forward to watching him build off of his season in 2017 and beyond."

Winnipeg (11-5) finished third in the West Division standings to end a five-year playoff drought. But the Bombers' season ended with a heartbreaking 32-31 decision to the B.C. Lions in the conference semifinals.

"I feel like we're moving in the right direction towards a Grey Cup," Adams said. "I've been there for two years and (head) coach (Mike) O'Shea and Kyle and everybody started a new movement there trying to win ball games and I want to be a part of it."

"I'm just glad they trusted me and gave me another chance to be there."

Starting quarterback Matt Nichols remains a pending free agent and Adams made it crystal clear he'd like to Nichols remain in Winnipeg.

"He's a great leader, he wants to win," Adams said. "Who doesn't want to have a quarterback who wants to win and would do anything to win?

"I'll probably shoot him a little message, a little joke. That's definitely up to him but I would definitely love for Matt to be back."