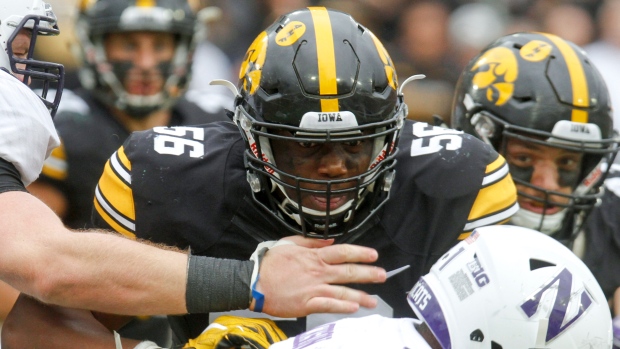 TORONTO — Faith Ekakitie wants to live up to the expectations of a first overall pick.

Winnipeg selected the six-foot-two, 304-pound Iowa defensive lineman No. 1 in the CFL draft Sunday. The move wasn't a surprise as the 24-year-old Brampton, Ont., native had agreed to terms with the Blue Bombers before being taken.

"My goal is to come in and be the best player I can. Hopefully that's being an all-star in the league and if not, then I just have to continue following God's plan for my life."

A total of 71 players were selected over eight rounds.

Winnipeg took Gray eighth overall while Ankou went in the third round to the Ottawa Redblacks. Auclair was taken in the fourth round by Saskatchewan while Edmonton selected Senior in the fifth.

"Faith Ekakitie is the player that, quite honestly, we had our eyes on for some time now," Winnipeg GM Kyle Walters said. "He's athletic, physical inside, and has the character which we covet in this organization."

Ekakitie joins a Winnipeg team that posted an 11-7 record to finish third in the West Division last season and snap a four-year playoff drought. But the Bombers' season ended with 32-31 to B.C. in the conference semifinal.

Ekakitie is just relieved to finally know where his football future lies.

"Being an athlete, a lot of us are used to having things so structured," he said. "It's just nice to finally have, for lack of a better word, direction in my life."

Saskatchewan took UCLA linebacker Cameron Judge at No. 2. But the Riders will have to wait to sign the six-foot-one, 220-pound Judge, who will attend the Houston Texans' rookie camp next weekend.

"It was a pretty long weekend last weekend not hearing my name (during NFL draft) so it was definitely a relief this time around," he said. "I'm going to Texans rookie camp so if things don't work out then, yeah, it's nice knowing I have somewhere to go."

At third overall, B.C. took McMaster slotback Danny Vandervoort, who addresses a need with the recent retirement of veteran Shawn Gore. The six-foot-two, 204-pound Vandervoort, of Barrie, Ont., was surprised to be taken so early but not by the Lions.

"At the CFL combine when I talked with (Lions coach/GM) Wally Buono and (Canadian scouting director) Geroy Simon they were kind of interested," he said. "I didn't think I was going to go third but it's awesome.

Edmonton, in GM Brock Sunderland's first draft with the club, took Carleton receiver Nate Behar with the fifth pick. The native of London, Ont., had 57 catches for 788 yards and nine TDs last season and twice was an All-Canadian.

In the only trade of the round, the Calgary Stampeders acquired the No. 6 pick from Winnipeg for the eighth and 34th selections and took Gannon University defensive lineman Randy Colling. The 26-year-old comes to the CFL after four years with the Arena Football League's Cleveland Gladiators.

B.C. made its second first-round selection at No. 7 and took Montreal defensive lineman Junior Luke. The six-foot-three, 234-pound Luke had 15.5 tackles and six sacks last season and fills a need for the Lions with Canadian Jabar Westerman now an Alouette.

After Winnipeg's selection of Gray, the Grey Cup-champion Ottawa Redblacks concluded the opening round by taking Saskatchewan offensive lineman Evan Johnson at No. 9. The six-foot-four, 280-pound Regina native was a second-team All-Canadian last season.

The Toronto Argonauts' first pick was Idaho offensive lineman Mason Woods to open the second round at No. 10. The six-foot-eight, 324-pound native of Port Coquitlam, B.C., started 34 straight games with the Vandals.

"(Woods) has played three years of major college football and against a lot of great talent which will make it an easier transition to come in as a pro athlete," said Toronto GM Jim Popp.

Laval offensive lineman Jean-Simon Roy, who had a CFL combine-high 39 reps in the bench press, went in the second round, 14th overall, to Edmonton. The six-foot-three, 285-pound Roy is likely to play guard in the CFL.

Simon Fraser linebacker Jordan Herdman, who played in the Senior Bowl and was attending the Kansas City Chiefs' rookie mini-camp, went in the seventh round to B.C. His twin brother, Justin, was taken six picks earlier (No. 54) by Toronto.