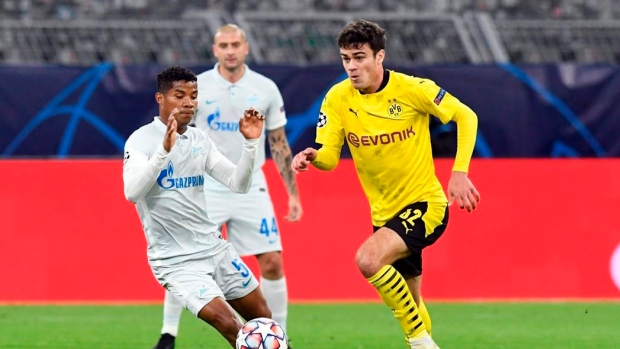 NEW YORK — Gio Reyna could make his U.S. debut next week on the eve of his 18th birthday.

The Borussia Dortmund midfielder, a son of former U.S. captain Claudio Reyna, is among 10 players on the youthful 24-man American roster who could debut in an exhibition against Wales at Swansea on Nov. 12. The Americans also play Panama four days later at Wiener Neustadt, Austria.

“Gio is a different type of attacking player. I think he’s more of a straight-line player, a guy who can arrive in the penalty box and can give a final pass, a final cross,” U.S. coach Gregg Berhalter said Tuesday.

Reyna could become the 12th player under 18 to make his U.S. debut. The match at Wales will be just the second in the pandemic-disrupted year for the Americans, who beat Costa Rica 1-0 on Feb. 1 with a roster of players mostly from Major League Soccer.

“When you look at the skill sets of all four of those players, they’re extremely different. So I think because of that, they fit really well together,” Berhalter said. “When you look at Tyler, you have a controlling midfielder with a lot of range, can easily play the No. 6 position, can give you that cover in transition, but also can give you the mobility to make good plays defensively and really put pressure on the opponent. When you look at Weston, he's a box-to-box midfielder who likes to arrive in the penalty box, strong in tackling but has that extra offensive edge to him. And then you look at Christian, who is a one v. one phenomenon, a guy that can just put players on their back heels very easily.”

Berhalter’s team is preparing for the start of World Cup qualifying, which likely will be delayed until next September.

Other young players getting playing time in Europe include 17-year-old Valencia midfielder Yunus Musah and five 20-year-olds: Barcelona outside back Sergiño Dest; Bayern Munich defender Chris Richards; Eindhoven midfielder Richard Ledezma; midfielder Sebastian Soto, who has five goals in six matches this season at second-tier Telstar in the Netherlands; and forward Nicholas Gioacchini, who has two goals in seven matches this season for second-tier Caen in France.

Musah has started for England's youth national teams and has the ability to play for either country. He was born in New York City, moved to Italy when he was months old and joined Arsenal's youth academy in 2012.

Johnny Cardoso, a 19-year-old defensive midfielder with Brazil’s Internacional, is the first player with a team outside North America or Europe to earn a call-up since midfielder Cobi Jones with Brazil’s Vasco da Gama in 1996.

Others who could make debuts are Chituru Odunze, an 18-year-old goalkeeper who transferred from Vancouver to Leicester’s academy in August 2019; and a pair of 19-year-olds who have dressed this season for European clubs but not yet gotten first-team club debuts: Barcelona forward Konrad de la Fuente and Wolverhampion midfielder Owen Otasowie.

Eighty-one players already have appeared since the October 2017 loss at Trinidad and Tobago that cost the U.S. a World Cup berth, including 43 making debuts.

Nine of the record 10 Americans on Champions League rosters were invited to camp, including Pulisic, who is recovering from yet another hamstring injury and is uncertain.

The Americans have not played on a FIFA date with most of their player pool available since a 4-0 victory over Cuba in the CONCACAF Nations League on Nov. 19 last year.

The last year with as few as three matches was 1987, when the U.S. played Egypt, South Korea and Thailand at the President’s Cup tournament in South Korea.

The roster’s average age is 21 years, 300 days. Starting goalkeeper Zack Steffen, limited to a pair of League Cup matches with Manchester City this season, is on the roster for the first time 2019. Lille forward Tim Weah, a son of former FIFA player of the Year and current Liberia President George Weah, is with the U.S. for the first time since 2018 after a pair of hamstring injuries limited him to three games last season.