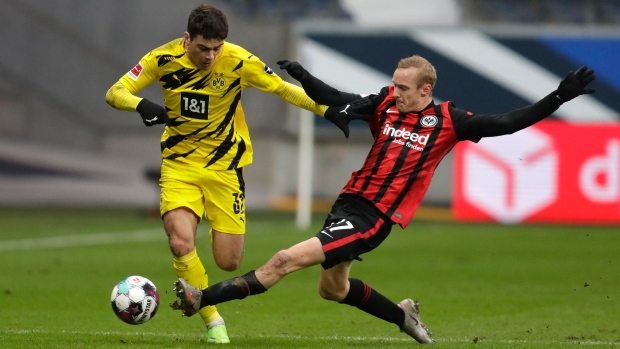 BERLIN — Teenager Jamal Musiala starred for Bayern Munich which twice came from behind to draw with Leipzig 3-3 Saturday and stay top of the Bundesliga.

The 17-year-old Musiala scored one goal and was involved in Bayern’s third as the eight-time defending champions stayed two points clear of Leipzig, which missed the chance to take first place.

Christopher Nkunku put the visitors in front in the 19th minute when Manuel Neuer rushed out of his goal. Nkunku simply rounded the goalkeeper before shooting into the empty net. Emil Forsberg had split Bayern’s defence with a through-ball for the French midfielder to score Leipzig’s first-ever goal in Munich.

Bayern took another blow when Javi Martínez went off injured, but Musiala – his replacement – equalized in the 30th with a brilliant strike inside the far corner from around 17 metres (yards). It was his third goal in eight Bundesliga appearances.

Bayern’s second goal in the 35th was just as good with an impressive display of one-touch football. Robert Lewandowski played the ball through Dayot Upamecano’s legs for Kingsley Coman. He played in Müller, who duly scored.

But Justin Kluivert equalized two minutes later with a low shot inside the far post. It was the first Leipzig goal for Kluivert, the son of Netherlands great Patrick Kluivert, since he joined on loan from Roma.

The action continued after the break, when Angeliño crossed for Forsberg to head in Leipzig’s third in the 48th.

Leipzig coach Julian Nagelsmann took Forsberg off half an hour early with Tuesday’s Champions League game against Manchester United in mind. Leipzig needs a win to be sure of progression.

Musiala, who was a threat throughout, set up Coman to cross for Müller to score Bayern's equalizer in the 75th.

“We knew before the game that we could come back. But it’s the case now that we often have to come back,” said Müller, who also scored Bayern's equalizer against Atlético Madrid in their 1-1 draw in the Champions League on Tuesday. Bayern was a goal behind before beating Stuttgart 3-1 in its previous game.

Borussia Dortmund stumbled again with a 1-1 draw at Eintracht Frankfurt.

American teenager Gio Reyna scored a fine equalizer for the visitors, but they clearly missed injured striker Erling Haaland. The 16-year-old forward Youssoufa Moukoko found his opportunities limited by Frankfurt’s hard-working defence after coming on for the second half.

Daichi Kamada scored in the ninth minute for Frankfurt after Dortmund’s defence failed to close down Martin Hinteregger, who played the Japan midfielder through. Kamada stayed cool to beat the outrushing goalkeeper Roman Bürki.

Dortmund struggled to find a response with only Jadon Sancho looking dangerous. The England winger came closest for the visitors before the break, while Aymen Barkok fired Frankfurt’s best chance over.

Dortmund coach Lucien Favre reacted by bringing on Moukoko after the break, when his side pushed forward even more.

But Reyna earned the point when he equalized in the 56th, cutting inside Hinteregger and letting fly inside the top left corner to give goalkeeper Kevin Trapp no chance.

“We can be happy in the end. We always want to win, but the first half wasn’t good,” Favre said. “I’m still OK with a point.”

It’s Dortmund’s second straight consecutive Bundesliga game without a win after last weekend’s 2-1 loss at home to Cologne, which had been previously winless.

Arminia Bielefeld held on for just its second win, a 2-1 victory at home over relegation rival Mainz.

Bielefeld scored for the first time in a first half this season through Manuel Prietl, and Ritsu Doan added another first-half goal for the promoted side’s first two-goal tally in the division.

Cologne held on for a 2-2 draw against unbeaten Wolfsburg, and Borussia Mönchengladbach was held to a 2-2 draw at Freiburg.