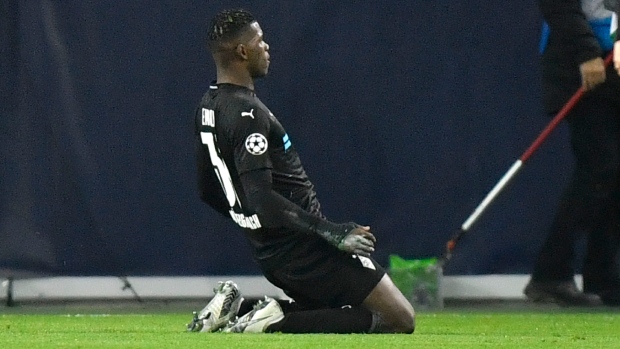 Breel Embolo scored with an overhead kick as Borussia Mönchengladbach eased to a 4-0 win over Shakhtar Donetsk on Wednesday to close in on a spot in the Champions League knockout stage.

Gladbach maintained its lead at the top of Group B and put more pressure on Inter Milan, which lost 2-0 to Real Madrid to fall six points behind the German club with two games to go. Madrid is one point behind Gladbach, while Shakhtar is four points back.

Gladbach was already two goals up before Swiss striker Embolo leapt to hit the ball in over his head after it was headed on at a free kick, leaving his marker Alan Patrick as a mere spectator. It was Embolo's first goal after he went scoreless in his first eight games of 2020-21 across all competitions.

“They’d all say in the locker room that it’s typical Breel that the tricky one goes in and the easy ones don’t," he told broadcaster DAZN.

Embolo had a large part in Gladbach's first goal, too, as he charged into the penalty area off a pass from Lars Stindl and was brought down by Serhiy Kryvtsov's desperate tackle. Stindl stepped up to hit the resulting penalty and sent goalkeeper Andriy Pyatov the wrong way.

Another desperate Shakhtar challenge gave away a corner from which Nico Elvedi headed in Gladbach's second goal.

In a quiet second half, Oscar Wendt made it 4-0 when his free kick cross eluded everyone in the box and went in at the far post.

Shakhtar was a shadow of the team which beat Madrid 3-2 earlier in the group stage and didn't record a shot on goal until the 83rd minute. Just as in Gladbach's 6-0 win over Shakhtar in Ukraine earlier this month, the German team was in total control.

There was a minute's silence in tribute to Diego Maradona before the game.