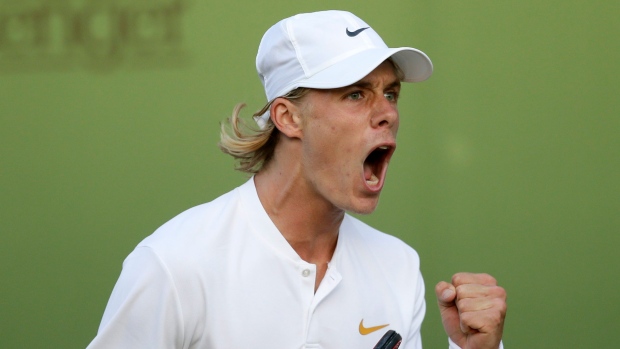 LONDON — Eugenie Bouchard and Denis Shapovalov are off to the second round at Wimbledon.

The Canadians both won first-round matches on Tuesday and will join fellow Canuck Milos Raonic in the second round.

A finalist at Wimbledon in 2014, Bouchard was forced into the qualification draw this year after seeing her ranking tumble to No. 191 before the tournament.

The 24-year-old from Westmount, Que., is now ranked 188th after winning three qualifying matches last week. Taylor is No. 180.

"I feel a lot more comfortable on the court," Bouchard told reporters after the match. "I feel a little bit more like myself. You know, I have always deep down had the belief, and it's about, in the tough moments of the match, keeping that belief. I have that more and more now. Just trying to keep progressing."

Shapovalov, meanwhile, beat one of the hottest players on the ATP Tour in the 46th-ranked Chardy. In his last three tournaments, Chardy won one title, reached a final and advanced to the semifinals.

The 19-year-old Shapovalov, of Richmond Hill, Ont., came into Wimbledon having lost three of his past four matches. It was his first win at Wimbledon after Shapovalov dropped his debut at the grass-court Grand Slam last year.

"I think I have definitely improved a lot on these courts from last year," Shapovalov said. "Obviously I have had some tough draws but today shows that my level is there. You know, Jeremy is a very tough player, so it shows that I'm able to play at this level."

Bouchard returned to Grand Slam main draw action at Wimbledon after failing to qualify for the French Open. The win was just her second in the past four years in the main draw at Wimbledon.

Bouchard won 73 per cent of her points on first serve, as compared to just 59 per cent for Taylor. The victor converted on five of her 13 break-point opportunities.

Bouchard said plenty of Canadians were behind her on Tuesday.

"Yeah, I felt great support," she said. "I saw a lot of Canadian flags. I got mobbed after the match, pretty much. But it's a mob of love, so I liked it.

Bouchard, now working with longtime tennis coach Robert Lansdorp, will face No. 17 seed Ashleigh Barty in the second round. The Australian beat Stefanie Voegele of Switzerland 7-5, 6-3 on Tuesday.

"I think she's playing great," Bouchard said of Barty. "I think she loves grass. I really want to raise my level and try and play my best tennis against her and see what happens."

Barty beat Bouchard in their only previous match, winning a three-setter on a hard-court in Miami last year.

Shapovalov will face unseeded Benoit Paire of France in the second round. Shapovalov won their lone previous match, on clay earlier this year in Madrid.

"It's going to be another tricky match," Shapovalov said. "You know, me and Benoit know each other pretty well, practised a ton. ... He has great hands, a big serve. It's not going to be easy, but I think if I continue my level, if I continue to play like I did, I'll definitely have a shot to win the match."

Meanwhile, Vasek Pospisil of Vancouver lost 6-4, 3-6, 6-2, 6-3 to Mikhail Kukushkin of Kazakhstan in a first-round men's match on Tuesday. Kukushkin is ranked 77th, 20 spots ahead of Pospisil, who has lost his past five first-round matches at Grand Slams.

Raonic, the No. 13 seed, will play unseeded Australian John Millman in the second round on Wednesday.

Also on Wednesday, Gabriela Dabrowski of Ottawa and partner Yifan Xu of China, the sixth seeds in the women's doubles draw, open their tournament against American Alison Riske and Olga Savchuk of Ukraine.